A number of the South’s top prospects in the rising sophomore and freshman classes were on display recently in Duncanville, TX at the Pangos All-Frosh/Soph Camp at the Duncanville Fieldhouse. Camp director Dinos Trigonis hosted over 220 players from fourteen states across the southern parts part of the USA.

In addition to the above-mentioned standouts there was an intriguing group of young talents that will draw lots of college interest to the South over the next couple of years, so stay tuned. With that in mind here’s a quick look at the top talent that emerged at the Pangos All-Frosh/Soph South Camp in Duncanville TX:

1. Tre White 6’6 2022 Cornerstone Christian (San Antonio TX)
This talented and athletic wing has the tools to take it end to end, knock down jumpers from the arc or off the dribble on the drive. He showed that he can rise and throw it down versus traffic in the lane too! He is an excellent passer who sees the court well and looks to involve teammates in the half-court. Kansas commit scored 20 points in the Top 30 game to cap off a stellar performance at the Pangos All-Frosh/Soph South Camp!

2. Lee Dort 6’10 2022 North Dallas Adventist (Plano TX)
This physical big man dominated play in the paint! He has excellent hands that allow him to catch in traffic and finishes with vengeance through contact. He has good touch, can pop to the elbow and hit the jumper or kiss it off the glass on the turnaround. He dominated the glass with his strength and nose for the ball off the board. He runs floor well and will be a high major target this coming spring on the circuit. Top big man in Duncanville was a co-number one with White in our eyes!

3. Robert Jones Jr. 6’3 2023 Ray Braswell (Aubrey TX)
Athletic scoring guard knocked down the jumper from three but was at his best pulling up from 15-17 feet off the dribble. He can finish in traffic at the rim with ability to flush over bigs! He gets on the glass and started the break off the dribble with the best in Duncanville! He is a good passer and made the pass off penetration when doubled. Definitely will be on high-major radar this coming spring! 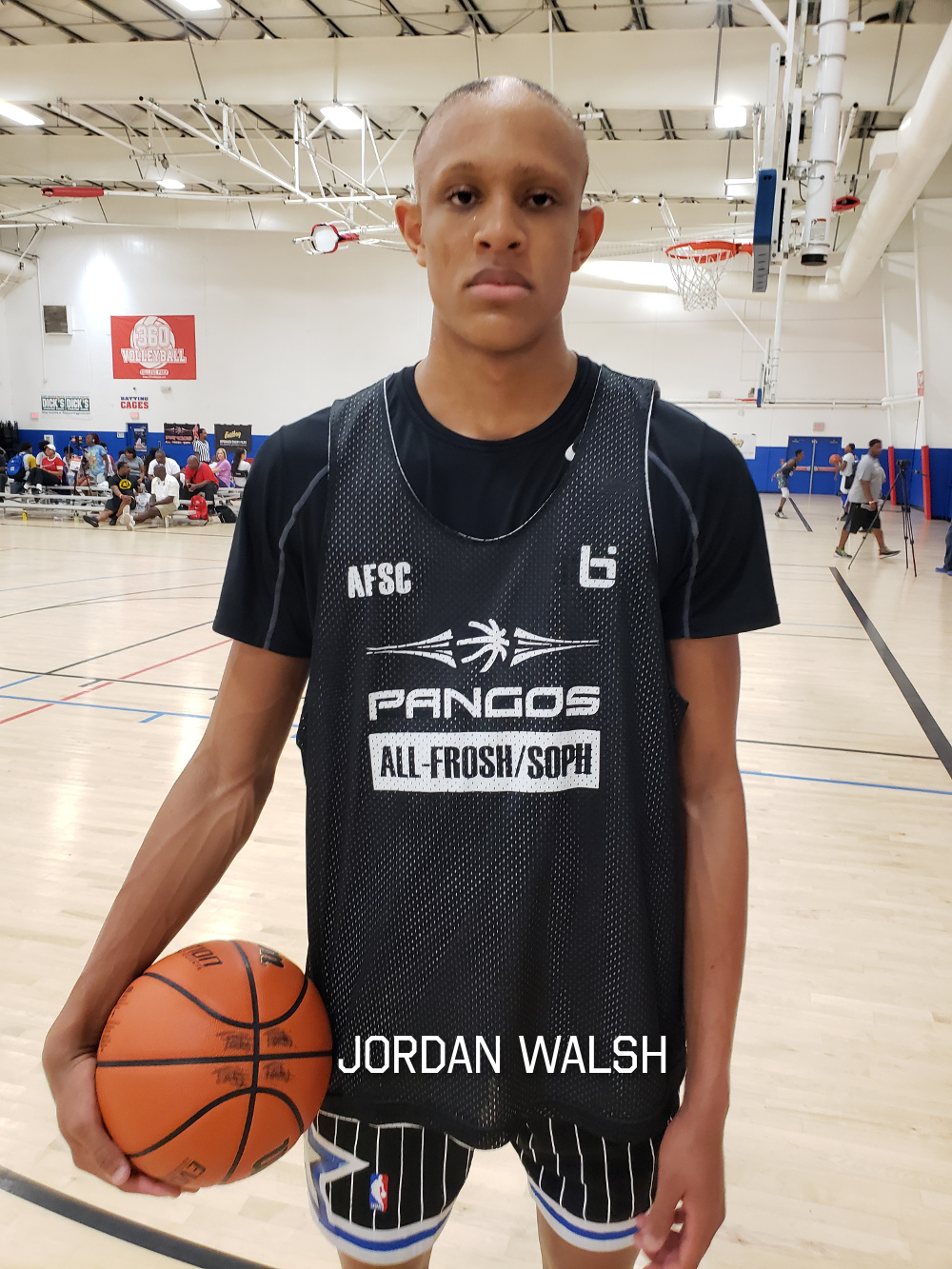 4. Jordan Walsh 6’6 2022 Faith Family (Cedar Hill TX)
This athletic wing can knock down the jumper from around the arc on “catch and shoot” or attack off the dribble and stick the mid-range jumper. He did a good job rebounding the rock out of his zone coming from the wing. He has ability to create, drive and is a good passer off the move. He’s got lots of tools, but needs to let game come to him and not try to create what isn’t there.

5. Ryan Agarwal 6’5 2022 Coppell (Coppell TX)
This skilled wing shooter was one of the big surprises of the weekend with his ability to knock down jumper from deep! He showed he can create drive going left or right, knocked down pull-up to 17-feet and finished with regularity off the cut and go. He scored 18 points in the Top 30 game to cap off a big weekend in Duncanville! High Majors should be adding his name to their recruiting lists! 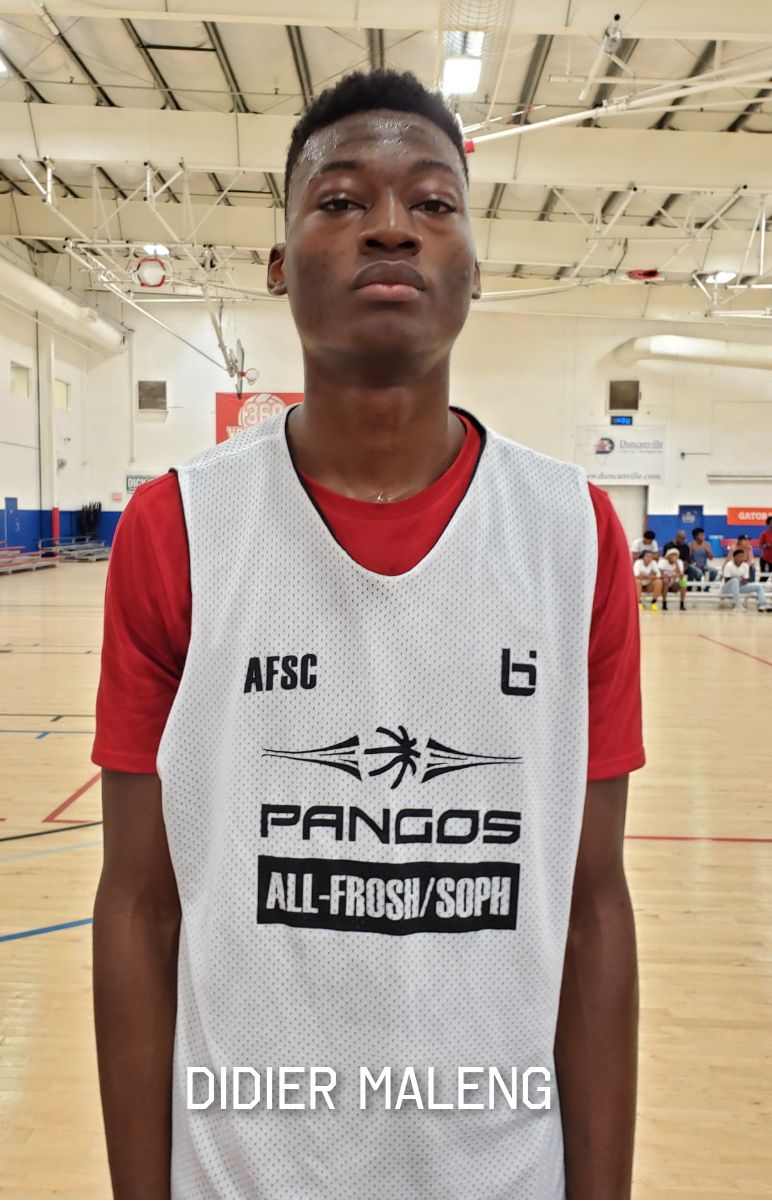 6. Didier Maleng 6’9 2022 Lawton Christian (Lawton OK)
Athletic, but thin big with length and bounce who can face and attack the rim and finish with the dunk or kiss. He is a solid rebounder both in and out of his zone and turns and starts break with quick outlet passes. He still has some work to do on shot facing and needs to continue to add strength to reach high potential that his athletic gifts promise. High-majors should be monitoring his progress!

7. Dylan Glover 6’4 2022 Bryan (Bryan TX)
This sneaky quick, but skilled scoring guard can knock down the three, create via the drive to go left or right and is a good passer who sees the court well when doubled and is willing to get ball to teammates, rather than just force it offensively. He played smart and really grew on me over the weekend. He will see lots of mid to high major interest down the road!

8. Keyonte George 6’4 2022 Lewisville (Lewisville TX)
Athletic scoring guard knocked down the jumper from three but was at his best pulling up from 12-15 feet off the dribble. He can finish in traffic at the rim too! He helped on the glass and got after opponents on “D”! He will be on mid to high major D-1 radar in the spring!

9. Cason Wallace 6’3 2022 Richardson (Richardson TX)
Athletic and quick back court talent with combo skills who showed he can score with the jumper off the dribble to the arc or finish drive at the rim with strength. He is a good passer in transition and hits the glass to start the break. He will see mid-up interest on the circuit!

10. Trae Clayton 6’4 2022 Faith Family (Cedar Hill TX)
This athletic and quick scoring guard has the handle to create drive or pull-up jumper. He hit jumper from three and knocked down pull-up jumper when challenged off the dribble. He can drive and kick, so he becomes a multi-threat player off the dribble that will see mids-up in the gym this winter.

11. Rylan Griffen 6’5 2022 Richardson (Richardson TX)
Solid wing athlete and scorer who can knock down jumper from beyond arc or off dribble to set up drive and finish. He has solid ball skills and is willing to get on the glass and start break too! Solid mid-up wing to watch!

12. Davonye Jefferson 6’3 2022 Berkner (Richardson TX)
Skilled wing guard with range to arc, solid handle and stroke to three. He has good quicks and can get to rim and finish in traffic or grab rebounds and push it end to end. He will see lots of mid-up D-1 interest!

13. Fred Payne 6’0 2023 Lincoln Prep (Grambling, LA)
Lefty point with that extra gear that allows him to go by opponents! He has range on his jumper to the three point arc that he uses it to set up dribble drive or pass in the half-court. He is a good passer who sees open man on penetration, and can kick it or finish effectively. He will see lots of mid-up looks!

14. Wadeng Wel 6’11 2023 RLTC Prep (Eagle Point OK)
Athletic and long big man who attacks ball on defense end and blocks shots. He runs the floor well and beats other bigs in transition, but needs to keep getting stronger to work toward the potential his body shows.

15. Samuel Murray 6’7 2022 Harrison Central (Gulfport MS)
Athletic combo forward is really mobile, has a real nose for the ball, and can finish around the hoop with his length and bounce. He has the tools to “pop and face” too but needs to work on consistency of shot facing hoop and continue to get stronger to reach potential.

16. Joseph Lucas 6’3 2022 Naaman Forest (Garland TX)
This physical combo guard can push ball in transition or attack rim off first step in half-court to create pass or drive. He is a good finisher in traffic, but stock will rise as jump shot extends beyond 17-feet. Has potential to become lead guard, mids-up should monitor his progress!

17. Solomon Washington 6’6 2022 Carver (New Orleans LA)
Active and aggressive forward gets on the glass, can start the break or take it end to end and finish with the flush! He hit pull-up jumpers on the elbow and can finish drive too versus contact but needs to extend range to make move to wing permanent and solidify his mid-up status!

18. Sean Johnson 6’4 2022 Sandia (Albuquerque NM)
Skilled wing guard with range to the arc, solid handle and stroke to three. He has good quicks and can get to rim and finish in traffic. He helped on the glass and can start the break with dribble or pass. Solid D-1 backcourt talent!

19. Francis Chukwudebelu 6’9 2025 North Dallas Adventist (Richardson TX)
First 7th grader to ever make the Top 30 game at Pangos Frosh/Soph camps! He is a solid shot blocker who has nose for ball off the glass for one so young. He has good bounce, can finish around the hoop with kiss or flush and runs well and can catch and finish. He has long way to go skill and strength-wise but is one that all levels of D-1 should be adding to their watch lists!

20. Alex Hammond 6’3 2022 McMain (New Orleans LA)
This late addition to the Top 30 game didn’t disappoint as he knocked down jumper with consistency, has solid handle to create drive and finished in traffic versus contact. He has tools to become consistent scorer at next level down the road, so stay tuned!

Eight Who Just Missed the Top Twenty: (Listed by Height)

As we said earlier there was a deep group of athletic talent in Duncanville with at least thirty to forty additional talents that will get solid division one looks in the future from college coaches from coast to coast. Next up we head to Chicago and the Park District of LaGrange, IL Recreation Center for the Pangos All Midwest Frosh/Soph Camp this upcoming weekend, October 19-20th, see you there!