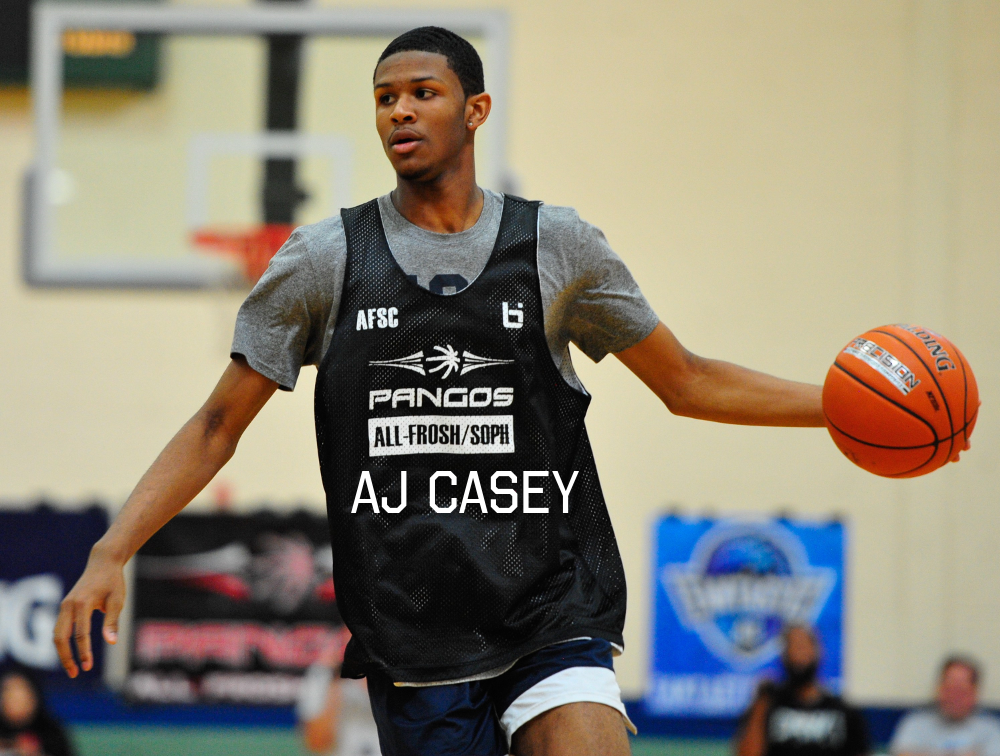 A number of the Midwest’s top prospects in the rising sophomore and freshman classes were on display recently (October 19-20) in LaGrange, IL at the Pangos All-Frosh/Soph Camp at the Park District of LaGrange. camp director Dinos Trigonis hosted over 220 players from fifteen states across the Midwestern part of the USA.

The top talent in the Camp was 6-8 freshman Omaha Biliew from Des Moines, IA who played at an elite level all weekend capping it off with a 27 point, 5 rebound and 10 blocked shot effort in the camp’s top thirty game! Right behind him was a group of exceptional young wing athletes in Jason Green, Ty Rodgers, A.J. Casey, and J.J. Taylor, while Jaylen Drane, Isaiah Jones, and Trey Pettigrew led a solid group of back court talents that formed the core of talent in my Pangos All-Midwest All-Frosh/Soph Camp Top Twenty!

In addition to the above-mentioned standouts there was an intriguing group of backcourt players that dominated the second ten, while the balance of the top players in LaGrange played upfront and on the wing. The camp talent seemed to expand on Sunday due to the improved quality of play we observed prior to the All-Star games. Speaking of the All-Star games they both went to overtime! In the Top 60 game, it went to a third overtime sudden death decision as the White squad won a 105-103 decision on free throws by 6’8 2022 Sulaiman Aguiste (Michele Clark/Chicago IL). In the Top 30 game, it was another sudden death finish as 6’2 2022 Jaylen Drane (Simeon/Chicago IL) stole the tip and scored on a quick lay-in to seal a 104-102 victory for the Black squad. 6-7 Jason Green (Millard/Omaha NE) was the Game MVP finishing with a game high 27 points!

So, with that in mind here’s a quick look at the top talent that emerged at the Pangos All-Frosh/Soph Midwest Camp in LaGrange, IL. 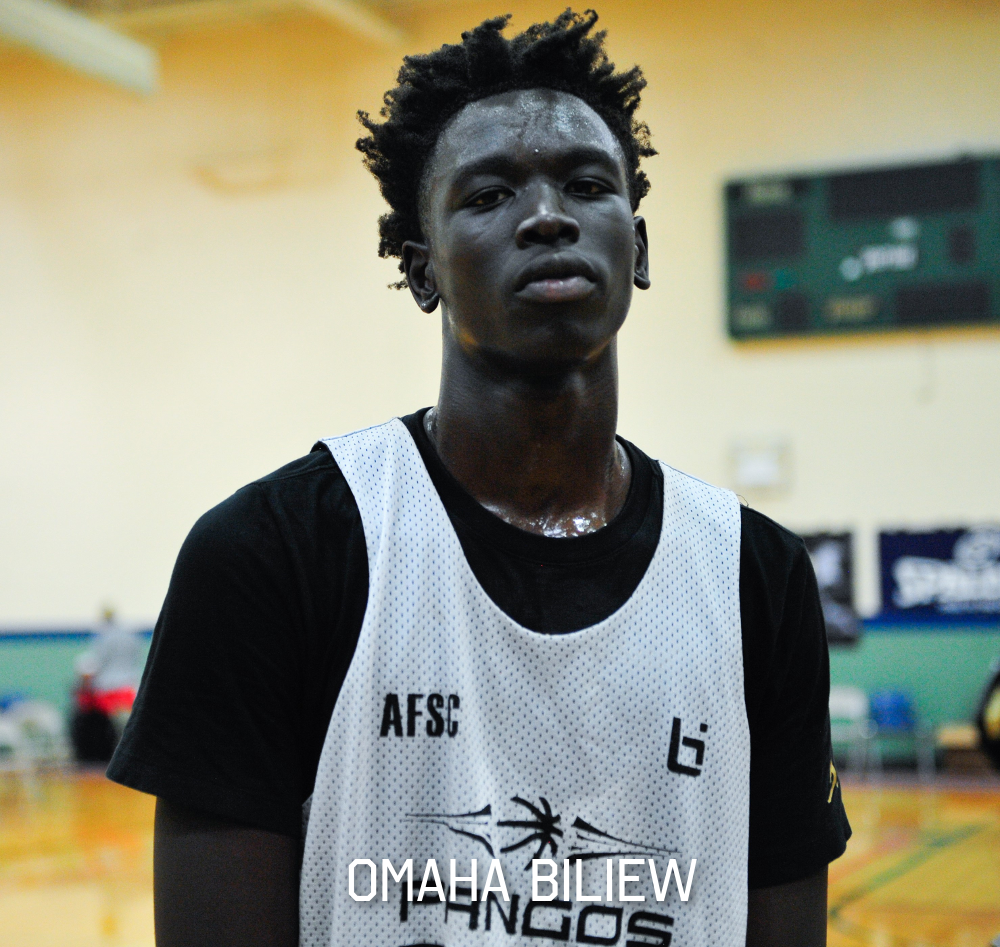 1. Omaha Biliew 6’8 2023 West Des Moines, IA (Dowling Catholic)
This long and explosive combo forward has the ball skills to play either forward spot! He is unstoppable to the hoop finishing through and over opponents at the rim. He has a solid jumper to the arc, but is at his best knocking down 15-17 footers off the dribble. He has range and is working on making the three-ball more consistent which will make him scary to opponents! But what sets him apart is his ability to play both ends, dominating the paint both on and off the ball, as he did in the Camp Top 30 game scoring 23 points and blocking 10 shots including two in the final possession of overtime to seal his team’s victory. He should be on the list of every high major in the country as he enters high school, period! 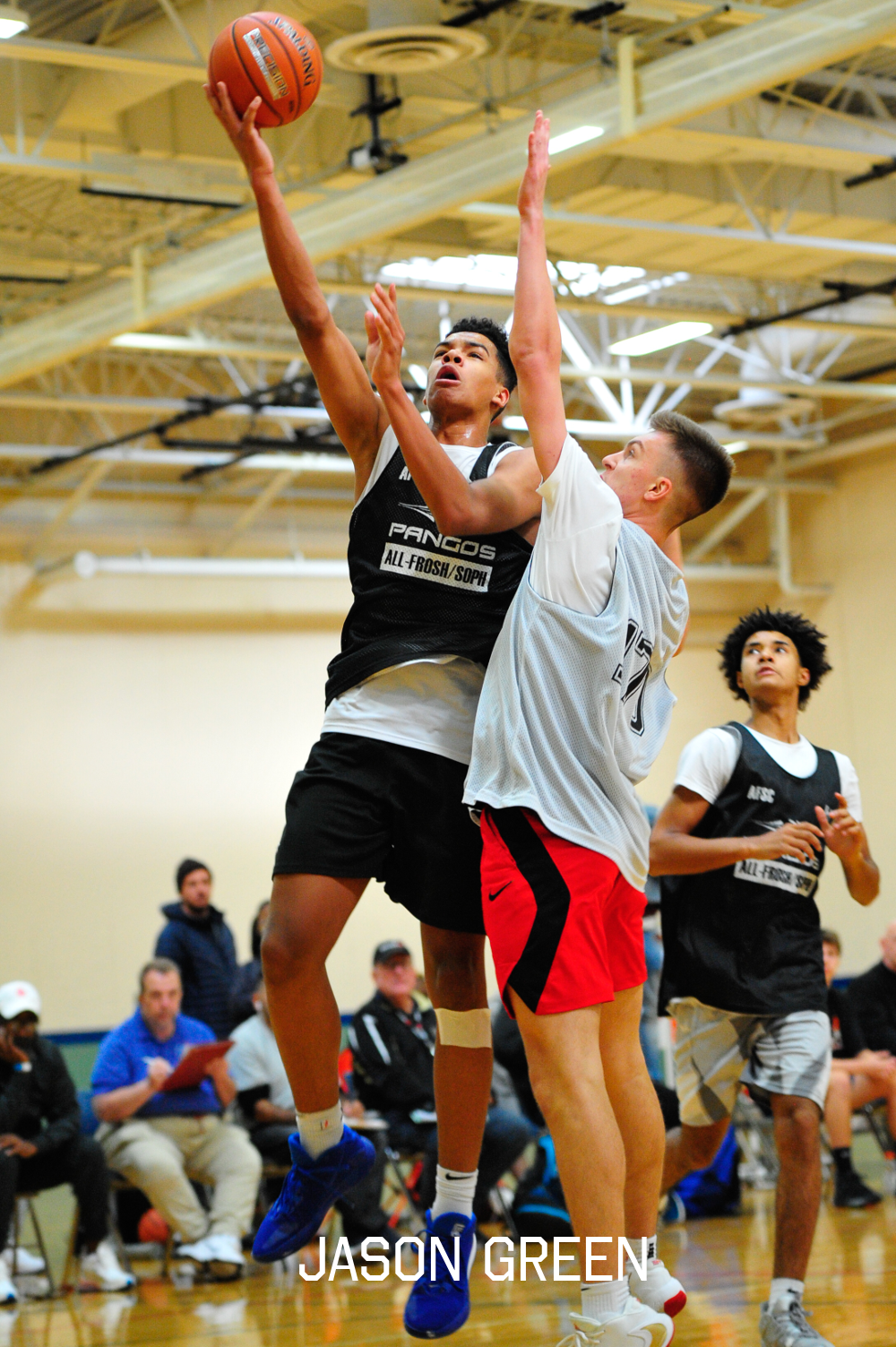 2. Jasen Green 6’7 2022 Omaha, NE (Millard North)
This talented and athletic wing has the tools to take it end to end, knock down jumpers from the arc or off the dribble on the drive. He showed he can rise and throw it down versus traffic in the lane too! He is an excellent passer who sees the court and is excellent at making the “drive and kick” to the open man on the wing. He scored 27 points in the Top 30 game to earn Game Co-MVP honors and cap off a stellar performance at the Pangos All-Frosh/Soph Midwest Camp!

3. A.J. Casey 6’8 2022 Chicago, IL (Tinley Park)
Athletic power forward with length and bounce who can face and attack the rim and finish with the dunk or kiss off the glass. He is a solid rebounder both in and out of his zone as he showed in Top 30 game pulling down a quick 7 caroms. He can turn and start the break with the quick outlet pass or dribble. He still has some work to do on shot facing to freeze defenses, and then use his quicks to the hoop to reach the high potential that his athletic gifts promise. High majors should be monitoring his progress!

4. Ty Rodgers 6’6 2022 Grand Blanc, MI High
This athletic and physical wing can knock down jumpers off the dribble inside the arc or attack off the dribble and finish with the kiss off the glass or flush at the rim. He did a good job rebounding the rock out of his zone coming from the wing. He is a solid passer in transition and as he becomes more consistent from three will be one of his class’ best! He should see lots of high major interest this coming spring on the circuit!

5. J.J. Taylor 6’7 2023 Chicago, IL (Morgan Park)
This long and athletic young big caught our eye early with his aggressive style on the glass and the ability to post up in the paint. He has quick feet and can finish with the flush or kiss in the paint and runs the floor hard to get easy lay-ins! He needs to work on adding consistency to his face-up jumper from beyond the elbow to set up his drive that he finished on occasion. He scored 11 points and grabbed 8 boards to garner a Co-MVP award for his squad in the Top 30 game! Definitely one that high majors should add to their recruiting lists! 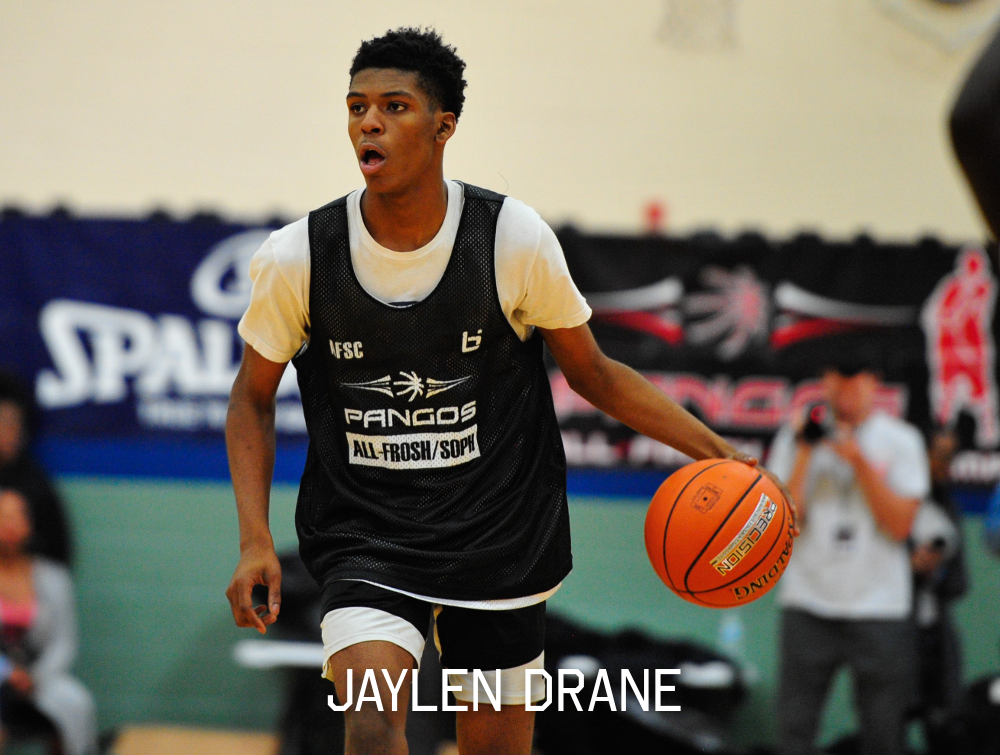 6. Jaylen Drane 6’2 2022 Chicago, IL (Simeon)
Athletic combo-guard knocked down jumper from three but was at his best pulling up from 15-17 feet off the dribble. He can finish versus contact in traffic at the rim! He gets on the glass and starts the break off the dribble and is a good passer on the break. He sometimes tries to do too much in the half-court game but will definitely be on the high-major radar this coming spring!

7. Nigel Hylton 6’8 2022 Lake Forest, IL (Academy)
This long and athletic big can attack the hoop off the dribble or post and turn with best in camp. He has ability to pop and hit fifteen footer but will have to extend range to play facing on a regular basis. He had an excellent Top 30 game scoring 9 points and grabbing 6 boards. He will draw lots of mid to high major interest on the circuit this coming spring.

8. Trey Pettigrew 6’2 2022 Oak Park, IL (Fenwick)
This sneaky quick, but skilled combo guard can knock down the three, create via the drive and finish at the rim versus contact. He is a good passer in transition and is willing to get the ball to teammates. He had a solid Top 30 game scoring in double figures with 12 points. He will see lots of mid to high major interest down the road!

9. Isaiah Jones 6’3 2022 Flint, MI (Carmen-Ainsworth)
Athletic and quick backcourt talent with combo skills who showed he can score with the jumper off the dribble to the arc or finish drives at the rim with strength. He is a good passer in transition and hits the glass to start the break. Has a high Basketball I.Q. He will see mid-up interest on the circuit!

10. Robbie Avila 6’8 2022 Oak Forest, IL High
Skilled combo forward has the ball skills to create via the dribble drive, finish at the rim or when doubled can make the pass to the open man on the wing. He has range to 17-feet on his face-up that allows him to create space. Just needs to continue to add strength and maturity to his game to reach the mid to high major levels!

11. Sosthene Kamba 6’6 2023 Louisville, KY (Ballard)
This solid wing athlete hit open jumpers from the three point arc off the dribble as well as catch and shoot. He is a good passer in transition and is willing to get on glass and battle for boards. He also posted people up and scored with good footwork and use of rim. He will see lots of mid-up interest in the future.

12. Tevonta Jackson 6’1 2023 Springfield, IL (Lanphier)
Quick, but solid lead guard who can knock down the three or hit jumper off the move. He is a good passer who can penetrate and kick or finish at the rim. Can run pick and roll or pop game out top! He has a solid two-handed game and can “D” you up too! He will see mid-up interest in the future.

13. Marcus Pilgrim 6’0 2023 Chicago, IL (Whitney Young)
Explosive lead guard who can get to the hoop in a hurry off the dribble. He has range to the three and is at his best pulling up off the dribble from 17-feet. He is a good penetrator who can kick to wing or finish with kiss off the glass. Plus, he’ll “D” you up too! He will see mid-up interest in the future!

14. Ashton Williamson 6’2 2023 Gary, IN (Calumet New Tech)
Young, but athletic combo with good size who sees the court and makes pass in transition or to the post in the half-court. He has a good mid-range jumper that will extend in time. He is willing to get after it on defensive end and works on glass from the guard spot too! If he extends range with consistency he will draw mid to high major interest down the road.

15. Dylan Arnett 6’8 2022 Chicago, IL (DePaul College Prep)
This long and skilled big caught our eye with his ability to catch it on the face-up, turn and create drive, then finish at the rim. He can hit 17-footers to keep “D” honest and showed he can pass it from high post or off the dribble. He can catch it in traffic and finish and does solid job on the glass both in and out of his zone. He needs to add strength to draw mid to high major interest!

16. Gabe Madej 6’5 2022 Oak Park, IL (Fenwick)
This solid wing athlete hit open jumpers from the three off the dribble or from the catch and shoot. He is a good passer in transition and is willing to get on the glass and battle for boards. He also posted people up and scored with good footwork and use of rim. He will see lots of mid-up coaches stopping to take a look this coming HS season.

17. Xavier Amos 6’7 2022 Chicago, IL (Whitney Young)
This active big man plays hard on both ends, gets on the glass, outlets and runs the floor. He can knock down jumpers off the trail to the arc or roll to the block and finish with the dunk or the kiss. He can face and create and is a good passer out of the high post. Mids-up should be monitoring.

18. R.J. Walker 6’2 2022 Decatur, IL (Eisenhower)
Young combo guard can drive and slash to the rim off the dribble. He scored with the floater and kiss in traffic and showed good form on his jumper that he will need to hone into a weapon to create the Mid-up interest his quicks promise!

19. Byron Hobbs 6’4 2022 Chicago, IL (Lindblom Math & Science)
Strong and controlled wing has all kinds of guard tools. He can pass it off penetration, push it in transition and finish in traffic with the floater or kiss off the glass. He hit midrange jumpers on the move but needs to extend range to make move to backcourt. One for coaches to watch as he matures into a guard!

20. Lidell Miller 6’6 2023 Chicago, IL (Morgan Park)
This physical rebounder scores with efficiency around the hoop that reminded most who watched him of a smaller Zach Randolph. He has a nose for the ball off the glass and doesn’t back down from anyone on the block. He capped his coming out party with a 10 point and 11 rebound performance in the Top 30 Game. He will see D-1 coaches coming to take a look this winter!

Next Ten Who Just Missed my Top Twenty: (Listed by Height)