By Adam Calleja, Nothing But Magazine Contributor

An incredibly deep pool of young guard talent was on full display at the 18th annual Pangos All-West Frosh/Soph Camp held at Westminster High School on September 22-23. What this year’s camp lacked in big time wing talent, as seen in 2017 with the likes of five star recruits Jalen Green and Josh Christopher, was made up for with a group of young and talented guards. Although there were a handful of talented bigs and a couple of athletic wings, it was the impressive guard play that stood out most through the weekend.

Lead Guards Ran the Show: 2021 Mater Dei PG Devin Askew quickly established himself as the best player in the camp. Askew seemed to do whatever he pleased on the offensive side; possesses a quick first step and a wide array of moves off the bounce to get by his defender. Has a quick and compact release on his jumper, capable of shooting both off the bounce or catch equally as well. Askew has the talent to be considered the best guard in the state these next few years.

2021 PG Isael Silva may have had the highest basketball IQ in the entire camp. The savvy lead guard showed skills beyond his years; made several high level passes that will leave you scratching your head. An excellent decision maker in both transition and the half court, Silva is a true floor general. As much as he excels with the ball in his hands, the most impressive part about Silva’s game is his ability to play off the ball so comfortably. He even drew comparisons to Ricky Rubio by some after his strong showing.

Vegas guards show out: 2021 Guards Frankie and Zaon Collins both had great showings. Frankie Collins was one of the best athletes in the camp; has that next level burst and is crafty around the bucket. Zaon Collins showed his lead guard skills as he played with poise and competed on both ends.

Askew may have been the best player in the camp, but 2022 PG Richard Isaacs Jr was easily the most electrifying player. Excelling in transition, Isaacs seems to just hit another gear with the ball in his hands. On top of his superior speed and ball skills, Isaacs possesed arguably the best jumper in the camp. He has the ability to stop on a dime and rise straight up into his smooth jumpshot and come straight back down showing impressive balance and consistency for a player his age. Isaacs will be an exciting player that will always attract a crowd during his prep career.

Athleticism raises eyebrows: 2021 Guard KJ Simpson and 2021 Wing Anthony Swift proved to be the best athletes of the camp as both made big time highlight plays at the rim all weekend. Simpson makes up for his lack of size with stand out quickness and athleticism, helping him play much bigger than his actual size. Once he polishes up his ball skills he’ll have the chance to be a big time prospect down the road. The same goes for Swift who has one of the highest upsides in the camp and was also maybe the only true “wing” in the camp. He is an absolute nightmare in transition as he runs the floor like a guard and finishes with the best in his class.

San Diego continues to produce talent: San Marcos Guards Chris Howell (2021) and Devon Arlington (2022) were two of the best guards in the camp. Howell was perhaps the most versatile player in the camp. When you combine his ball skills with his size and length, you get a big time prospect and that’s what Howell is becoming. Arlington immediately impressed with his poise and smoothness with the ball. A very confident young guard with a strong feel for the game. I’d like to see him be more of a facilitator as he will need to learn to balance his floor game and learn when it’s necessary to look for his own points. Seems to still be growing and has the chance become one the top guards in the state for his class

2021 Guard Aaron Burgin has been on a bit of a tear these past few months. Burgin is an aggressive guard rapidly growing as both a facilitator and scorer. He possesses a quick release on his jumper with smooth mechanics, unafraid to let it fly. Got hot from deep several times throughout the weekend opening up his dribble drive game where he showed his ability to see the floor as well. Proved to also be one of the better guard defenders when motivated.

Big Upside Big Men: 2022 Forwards Henri Adrissa and Kijani Wright both proved themselves as two of the more promising long-term prospects in the camp. Wright showed an impressive set of skills as he was grabbing rebounds and pushing the ball coast to coast with ease numerous times throughout the camp. Adrissa showed his big time athleticism, length and impressive feet locking up guards on the perimeter after a switch several times. Both prospects should develop into highly coveted national recruits.

Under the radar guards: 2022 PG Isaac Peralta showcased his impressive floor game throughout the weekend. Has the ball on a string and can get anywhere he wants with ease. Handles pressure comfortably and can see the floor well. Jumpshot can use some work but has the foundation in that area to build on. An interesting young point guard to keep an eye on.

2022 PG Ben Shtolzberg was possibly the most underrated playmaker in the camp. Has a knack for setting up his teammates and is able to get in the lane and make plays with ease. Very unselfish player who didn’t demand the ball; was also comfortable moving without the ball. Should develop into one of the better playmakers in the state for the coming years. 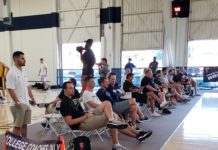 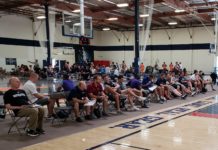 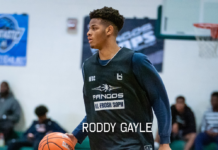