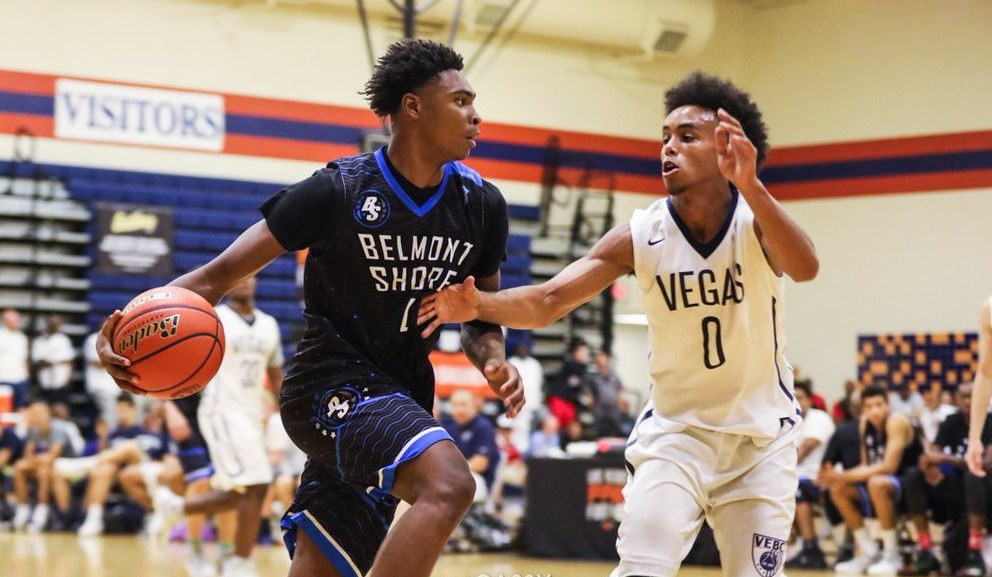 Is Bryce Hamilton the heir apparent?

Can he enhance the family legacy?

Signs point to the answer being yes.

Ranked No. 76 in the nation for the Class of 2018 by Nothing But Net Magazine, Hamilton comes from good stock, after all. Equipped with basketball bloodlines, the 6-foot-4 guard from Pasadena (CA) appears poised to carry the torch.

Worth mentioning, the lineage seemed to start with father and UTEP-product Kevin Hamilton who once played for legendary coaches such as Willie West in high school at Crenshaw (CA) and Bear Haskins in college with the Miners.

Brother and Buffalo-product Blake Hamilton continued the tradition and is playing overseas this upcoming season in Latvia. Naturally, after watching the success of both, Bryce would like nothing more than to follow in their footsteps.

His cousins Texas-product Jordan Hamilton and UConn-product Daniel Hamilton played major college ball before moving to the NBA and their brother UCLA-product Isaac Hamilton played for the Indiana Pacers in the recent NBA Summer League.

The oldest sibling of Jordan, Daniel and Isaac, Miami-product Gary Hamilton enjoyed a successful professional career as well, albeit overseas. Therefore, safe to say, Bryce has had some guidance along the way. He grew up with the game.

Still young, yet with plenty of upside, the 16-year old left-hander will soon join the ranks of his predecessors at the next level. With double-digit scholarships in place, and counting, it’s only a matter of time before he picks a college to call home.

Pac-12 Conference schools such as Arizona State, Colorado, Utah, Washington and Washington State hope to keep him on the West Coast. UNLV, Nevada, UC Santa Barbara and UTEP are in the same boat with similar intentions. Interestingly enough, Ohio State recently jumped on the bandwagon with an offer.

“Bryce has always had the name, also no problems with passing the eye test, but really, he was able to take his game to a whole other level this past summer and was phenomenal,” said Corey Evans, National Recruiting Analyst for Rivals.

“One of handful of the country’s top scorers, he’s organic in that sense. Confident, when Bryce is feeling it, few are better. Great body, good athlete, and once he figures out consistency, put that all in one, and he’ll be a mammoth weapon in college.”

More than steady as a sophomore on the prep circuit at Pasadena, Hamilton delivered breakout numbers as a junior with the Bulldogs and averaged 24.6 points, 8.2 rebounds, four assists, three steals and two blocks for coach Tony Brooks.

Hamilton earned numerous accolades as a result of his production, including Pasadena Star-News Player of the Year and a third-team all-state selection from Cal-Hi Sports. Remember, it’s not as if he was an overnight success.

Hamilton first emerged on the grassroots circuit with Belmont Shore back in 2016. Accordingly, not long after, several eye-opening efforts followed, specifically speaking at Pangos Sweet 16 in Las Vegas (NV) and Terrific 24 in Indianapolis (IN).

A severe ankle injury limited him at this year’s invite-only Pangos All-American Camp and NBPA Camp. However, healthy at the recent Fab 48 in Las Vegas (NV), he averaged 29.6 points, including a 49-point outburst, and was an all-tournament selection.

Given past experiences, and a constantly improving skill set, the future is particularly bright for Hamilton. Playing at the collegiate level is certain. Duplicating the feat is possible in the NBA. Bottom line, the family tradition is alive and well.