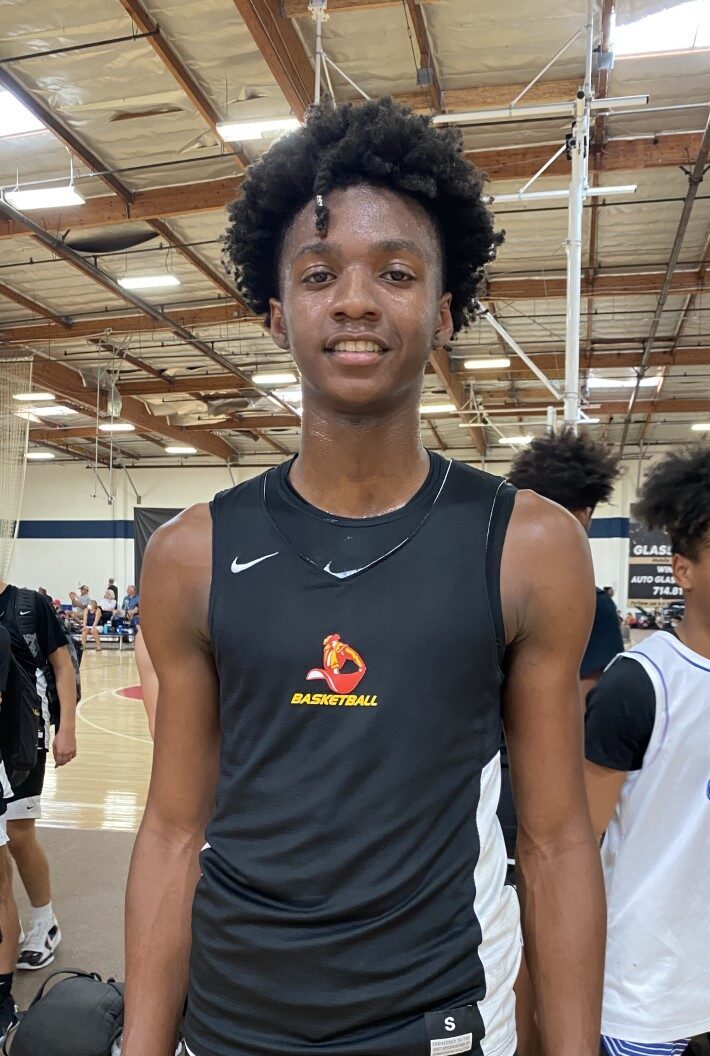 Last weekend, AVAC United and Southern California Academy hosted the Fall Invitational High School Showcase at the Maps Sports Facility in Garden Grove, CA. The event took place over a 3-day period, from October 1st-3rd, and featured some of the top teams and talent from Southern California. I was only in attendance Saturday for the morning and afternoon sessions and below are my player evaluations for 15 of the top players I was able to watch. There were some teams that I was not able to see play due to overlap of game times or no games played on the day I was present.

Abram is a physical and skilled lead guard that can light it up from anywhere on the court. The Texas A&M commit has an elite handle on the basketball and controls the pace of play while staying poised under pressure. Abram has the strength and physicality to bully his way to the rim and finish through contact, ability to stop on a dime with a deadly pull-up jump shot, and is highly efficient with the stepback 3 ball. Abram changes directions frequently, has shifty moves to evade defenders, and keeps the defense off-balance, creating space for open looks. He has solid court vision and with his elite shot-making capabilities, Abram is able to find teammates for open looks when on the attack.

Kensie is a lengthy and athletic guard/wing that can create his own offense, as well as make plays to find open teammates. Kensie has solid handles and perimeter moves to create off the dribble and gets into the paint, forcing the defense to collapse where he displays great court vision to find open teammates in tight windows. He does a nice job of using his long first step and good acceleration to get by his initial defender, enhancing his playmaking abilities. Kensie is an effective scorer from all 3 levels and is comfortable playing the 1-3 positions at a high level. He is active on the glass and uses his long wingspan to alter shots.

McCloskey has impressive lead guard skills with the ability to knock down the 3 ball. McCloskey has good size and court vision to dissect the defense when running the offense, nice ball-handling skills, and crafty moves to attack the defense, gets downhill to the rim and showed the ability to finish through contact around the basket. He reads the defense well when attacking the paint, creative finisher at the rim, and has great touch on his floater to get shots off over taller/longer players. Proficient from the 3 point line, which opens up lanes for him to attack and make plays.

Kohler is the prototypical modern big who can punish his opponent in the post, as well as stretch the defense from beyond the arc. The Michigan State commit is well known for his outstanding footwork and elite post moves, which he uses to get his defender off balance and create space for easier buckets amongst the bigs. Along with his high-level post-game, Kohler has a smooth stroke on his shot that makes him nearly impossible to defend with his accuracy from 15 feet and beyond. Kohler dominates the boards on both ends, creates second chance opportunities for his team, gets the ball up quickly for putback points, and has the length and IQ to alter and block shots around the rim.

Johnson is a skilled and creative lead guard that has the size and court vision to pick apart any defense. Johnson has a great handle on the ball, creates separation and driving lanes to attack the defense with his super shifty crossover, a long first step to get by his initial defender, and impressive court vision to find open teammates when on the attack. Johnson has improved his efficiency from the 3 point line, has the length and creativity to finish around the rim, and his fluid style of play shows the level of confidence he has on the court. Johnson is a solid rebounder and, as a true lead guard, he thrives when he is able to push the tempo in the open court.

Price has the ideal combination of size, length, athleticism, and skill to impact the game in a variety of ways on offense and defense. Price has the handle to create off the perimeter, uses his length to his advantage to get by his defender, and can space the floor from the 3 point line to keep the defense honest. Price is active on the glass, has a great wingspan to alter and block shots in the paint, good footwork, and agility to defend on the perimeter showing his versatility on the defensive side of the ball. Offensively, Price is really effective around the basket, with good hands, coordination, and creativity to get buckets around the cup. Impressive skill set that has room to get better, which should concern opponents.

Cowherd is a lights-out shooter from beyond the arc that brings a level of energy and toughness to the court that is infectious to his teammates. The Ole Miss commit moves really well off the ball, creates the ideal space needed for catch and shoot threes, has a smooth stroke on his shot, and can fill it up from the 3 point line in bunches. Physical guard that has a strong handle on the ball, has nice moves to attack off the perimeter, gets downhill with a nice burst of speed, and makes good decisions with the ball in his hands. Defensively, Cowherd uses his strength and active hands to get into his defender’s space and create backcourt turnovers that lead to transition points. He rebounds the ball at a level beyond most guards, plays with a relentless motor, and leaves it all on the court.

Bartlett has great size and strength to dominate in the post with a nice touch on his shot to keep defenders honest. Bartlett rebounds at a high level, creates second chance opportunities for his team, and displays good timing and agility to be an elite rim protector. Offensively, Bartlett has good hands and touch to finish around the rim, shoots the mid-range shot with confidence and accuracy to pull his defender away from the basket, and does a nice job of finding cutting teammates when the ball is in his hands. He is capable of hitting the 3 ball and showed good footwork and back-to-the-basket moves to create his own scoring opportunities.

Sellers is a true shooting guard that understands how to score at a high level with or without the ball in his hands. The USC commit has a great shooting form, the handles and perimeter moves to create his own offense off the dribble, and can score it at all 3 levels with efficiency. Sellers keeps his defender busy by constantly moving off the ball, running off screens, and getting to his spots with separation to get his shot off. He is a knockdown 3 point shooter that has improved his lead guard skill set to make him a viable option at the 1-3 positions. Sellers competes at a high level, plays with poise, and has a great feel for the game.

Toliver is a wing/forward slasher that plays to his strengths and impacts the game in numerous ways around the basket. Toliver is relentless on the boards, has good length to alter shots around the basket, and has the athleticism to defend smaller players on the perimeter. Offensively, Toliver does a nice job of slashing through the lane off the ball, which creates openings for him to receive the ball on the move for easy finishes at the rim. He has size and strength to finish through contact at the rim, effective mid-range shot to keep his defender honest, and enough handle to attack downhill and get to the cup. Most impressed with how Toliver plays to his skill set and helps his team in the areas needed.

Bush is a high-level lead guard that knows how to run an offense and locks in on defense. Bush has a dynamic handle on the ball, lefty that has great moves to create off the dribble and the wiggle to knife through the defense, and creative to finish at the rim over bigger players. He has impressive court vision, keeps the ball on a string while surveying the court, nice use of the hesitation to keep the defense off-balance, and plays the game at his pace under control. Bush does a great job of attacking the defense, getting them to collapse, and makes the right read to find open teammates. Defensively, Bush has active hands, gets up into his opponent’s space, and generates turnovers that lead to open court baskets.

Shepherd is a physical and skilled combo guard that is capable of scoring it from various spots on the floor. Shepherd has a solid handle on the ball, creates his own offense nicely off the dribble drive, and is capable of finishing strong through contact at the basket. He rebounds well for his position, which allows him to get out and push the tempo in the open court. Shepherd was at his best when working off the pick in roll, displaying the ability to read the defense, and either find open teammates or get his own points. Versatile combo guard that can run the offense or play off the ball.

Mercadel is a solid lead guard with great on-court poise and control of the pace of play. Mercadel has a nice handle on the ball, keeps the ball on a string while surveying the court, good court vision to find open teammates, has a good grasp of the game to run the offensive system, and is very efficient from the 3 point line. Mercadel rebounds well for his size, which allows him to push the tempo and get out and run in the open court. He has nice moves to create scoring opportunities for himself, but his role with his high school team does not call for that as much as during the AAU season.

Hill is an athletic wing/guard that displays the versatility and skill needed to play the 1-3 positions effectively. Hill is active on the glass, displays great off-ball movement when cutting through the defense for easy finishes at the rim, and is proficient from the 3 point line. Hill has the handles and the perimeter moves to create his own offense, but that is not his primary role for his high school team at the moment. Defensively, Hill has quick hands and jumps passing lanes well to create turnovers and has the handle to push the ball off the rebound in the open court.

Williams is an athletic guard/wing that plays well on and off the ball. Williams has solid court vision, good handles to operate off the perimeter, and has a smooth shot from the 3 point line. Williams rebounds well for his positions, gets the ball out in transition, and plays with great bounce. St. Anthony has a really nice trio and should be able to make some noise this season. 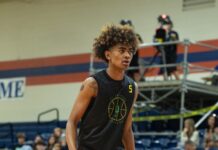