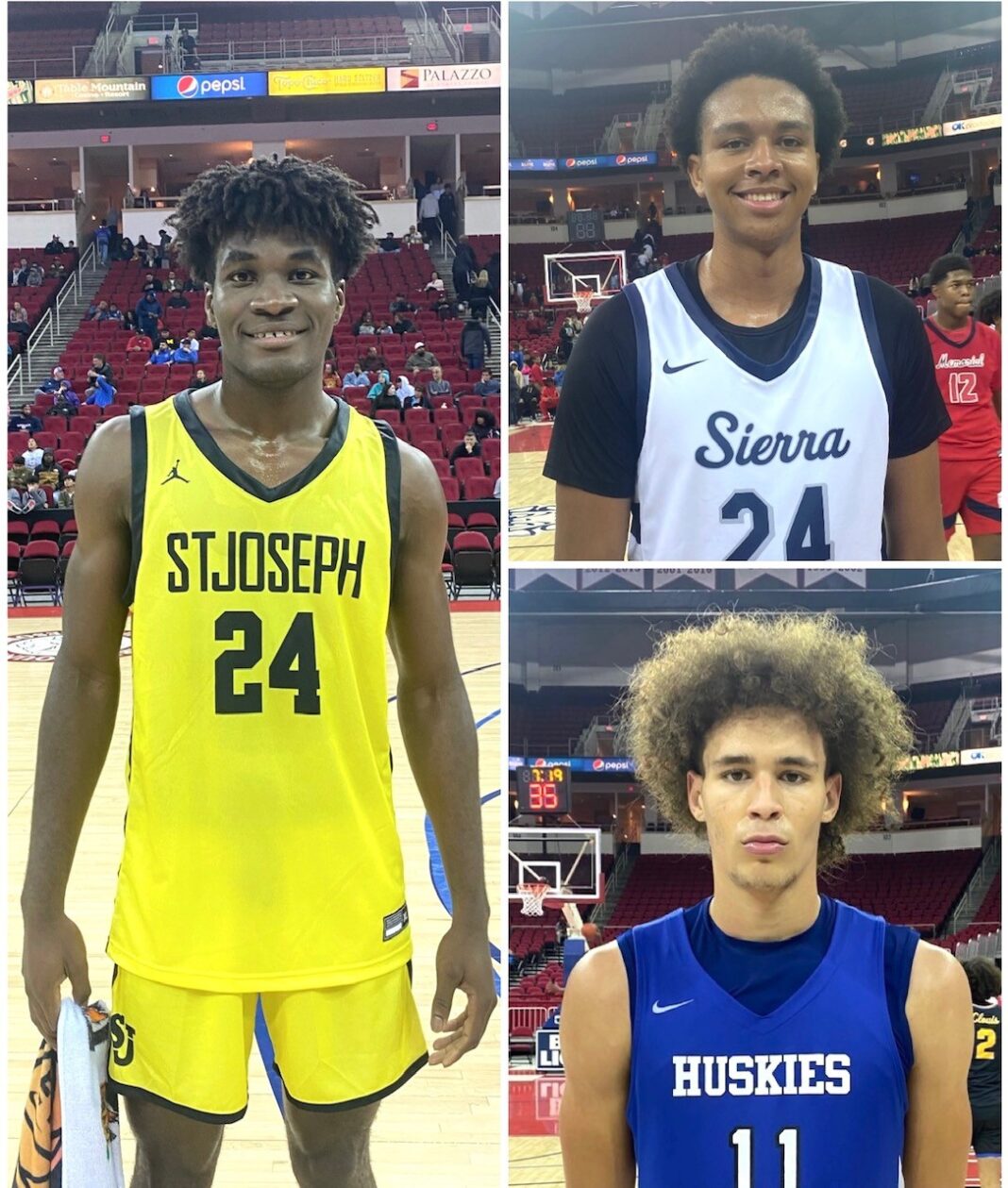 Fresno, CA – This past Saturday, December 3rd, the Save Mart Center at Fresno State University hosted the inaugural Heart of California Basketball Classic put on by Demetrius Porter (director of Fresno-based EBO club basketball program) and Jarvis Turner (head basketball coach at Beverly Hills High School). The one-day event featured 18 teams from various areas of Central, Northern, and Southern California with a slate of 9 games headlined by the marquee match-up between CalHi Sports preseason #4 Sierra Canyon of Chatsworth and #39 San Joaquin Memorial of Fresno. The first 3 games of the day and the 6th game of the event were the 7th place, 5th place, 3rd place, and Championship games from Clovis North’s annual Valley Children’s Tip-Off Invitational, which was combined with the Heart of California Classic to make for a total of 9 games at the Save Mart Center.

I arrived at the facility at the start of the fourth quarter of the 2nd game of the Heart of California Classic, as the Clovis East Timberwolves were throttling the Newark Memorial Cougars en route to a 71-34 win. The Timberwolves were led by freshman phenom Dalen Felder with 17 points. The remainder of this article will provide a recap of the seven games I was in person to watch, the top players in each game, and the leading scorers for each team. I begin with the first full game I observed in person, which was the 3rd game of the HOC Classic and 3rd place game of the Valley Children’s Hospital Tip-Off.

The first complete game I covered was between the Giants and the Eagles, which was the 3rd place game of Clovis North’s tournament that was combined with the Heart of California Classic’s overall schedule of games. The Giants had the obvious size advantage and got the ball in the post early and often, as the Eagles had no answer for senior forward Ains Fish in the early going. The Giants used their length on defense to create turnovers and their great ball movement on offense to create easy-scoring opportunities to take a 32-23 lead into the locker room at the half. Despite the Eagles’ scoring woes early, senior Adam Silmon got it going in the 2nd quarter with six points, as well as two big threes by junior guard Zach Soriano to keep the deficit in the single digits.

Soriano connected on 3 more threes in the 2nd half but the dominance of Fish continued as he was scoring the ball from all 3-levels and controlling the glass to limit the Eagles’ scoring opportunities or give the Giants multiple looks on offense rebounds. Junior guard/wing Jake Vasquez chipped in 10 points and 6 rebounds and the Giants had a total of nine players score in the one-sided affair, as Redwood would win convincingly, 63-38, and take home the 3rd place trophy from the Valley Children’s Tip-Off Invitational.

Redwood leading scorers: Fish had 26 points (player of the game), 7 rebounds, and 3 assists, Vasquez with 10 points and 6 rebounds; and junior Gavin Edelen had 9 points with 3 threes.

Arroyo Grande: Soriano had 15 points connecting on 5 threes; and Silmon finished with 8 points.

The fourth game of the Classic featured one of the Central Section’s top senior prospects in forward Jaden Haire of Hanford West, along with standout sophomore Remy Barnes. The Tigers featured standout senior, and fresh off an amazing football season at the quarterback position, lead guard Va’J Vance. Edison came out aggressive on the defensive end and was attacking the basket on the offensive end. Vance connected on a pair of threes and got to the basket off the dribble with relative ease to score 12 of his 19 points in the 1st half. The Tigers also got 9 points from junior Va’Ron Mitchell and 8 points from senior Ki’mauri Washington to give Edison a double-digit lead going into halftime, 36-23. The Huskies were carried by Barnes in the early going, as he would score 11 of his 20 points before intermission. Haire added 8 points in the half but struggled to get going from the perimeter.

The 2nd half would be a different story, as Haire asserted himself in the paint, showed his range with the 3-ball, and earned what seemed like countless trips to the free-throw line. Haire would score 13 of his game-high 30 points in the 3rd quarter and got the Huskies to within four points going into the 4th quarter, 50-46. Despite the valiant effort by Haire and Barnes, the Tigers got a big 2nd half from Washington, scoring 11 of his 19 points, as well as 8 points from junior Kameron Bowen to extend the lead back to double digits and the win, 70-57.

Edison: Vance had 19 points, 6 rebounds, and 5 assists (player of the game); Washington had 19 points; Mitchell finished with 11 points and 7 rebounds; and Bowen had 10 points.

In the 5th game of the Classic, the Apaches started off slow and fell behind 16-8 at the end of the first quarter, as senior Kaleb Cole was the only player to score. The Cougars got a boost from their bench with two threes by senior Mason Theobold, but struggled to score the remainder of the game.

The score was tied at twenty-one at the half, but the 2nd half would be dominated by the Apaches. Junior Nolan Willison came up big after intermission, as he would score 11 of his 14 points, and drained 3 threes in the half and 4 for the game. Cole finished strong with 10 in the 4th quarter and Sanger won by a score of 62-40. Cole was the player of the game and showed his ability to impact the game in a variety of ways.

Sanger: Cole 21 had points and 8 rebounds; and Willison added 14 points.

Clovis: Theobold had 8 points for the Cougars.

The match-up between the Knights and the Eagles featured the best individual performance of the day by Top 25 nationally ranked super sophomore Tounde Yessoufou, who had a monster 40-point scoring outburst and showed why he is one of the fastest-rising prospects in the nation regardless of class. The Eagles were short-handed, as they have multiple players out due to the CIFs transfer rules. St. Joseph is considered the top team in the Central Section but they were missing standout senior Luis Marin, which would even things out a bit more for Bakersfield Christian.

Yessoufou got it going early for the Knights, as he had 10 points in the opening quarter to give St. Joseph a 20-11 lead. Standout junior Bentley Waller contributed 9 points in the first half to help keep the Eagles close, but it was senior Michael Shafic with 3 huge threes in the first half that really kept the game interesting as intermission approached. Tounde and senior Caedin Hamilton, who had 24 points and 9 points respectively, provided a double-digit cushion at the half, 45-32.

Although Bakersfield Christian battled and competed in the 2nd half, the dominance of Yessoufou and a big contribution from senior Will Kuykendall, with 11 of his 14 points coming after the break, were too much for the Eagles to overcome. The Knights won the game by a score of 92-60 and Yessoufou was the obvious player of the game and was the best player of the event.

The 7th game of the event was the championship game for the Valley Children’s Tip-Off Invitational and featured a match-up between the Broncos and the Knights. It has been well documented by now that Clovis North will be without their top player Connor Amundsen for the season, but this has not stopped the Broncos from being one of the best teams in the Central Section, as was evident in their dominant win over the Knights.

Clovis North jumped out to a 23-6 lead to end the first quarter and got a big contribution from senior Jaylen Bryant with 8 points. The lead continued to grow, as the Broncos were getting contributions from nearly every player that entered the game, with 8 players scoring in the 1st half and taking a 43-15 lead into the locker room. Junior Jaleel Jackson heated up in the 2nd half but that was countered by Clovis North’s junior Jordan Espinoza with 10 of his team-high 17 points coming after intermission. The Broncos won 75-54 and were the champions of the Valley Children’s Invitational, as Espinoza would earn most valuable player honors for that tournament.

The last game before the main event featured two Northern California teams, but Monterey Trail was still without standout junior Ben Roseborough and that would prove to be too much for the Mustangs to overcome. Granada looked to get senior and St. Mary’s commit Andrew McKeever going early with his size advantage but the Mustangs swarmed him and made it tough for him to get clean looks around the basket early on. The Matadors got big contributions from juniors NaVaughn Long and Marco Wilde, who had 10 points and 11 points respectively in the first half to give Granada a 39-27 lead at halftime. Long Beach State commit and senior Varick Lewis did all he could to keep his team close with 12 points going into the break.

Despite the great 2nd half from junior Damian McAlister with all 11 of his points coming after intermission, as well as the continued solid play of Lewis, the firepower of Granada, was too much to contend with. The Matadors got huge 2nd half contributions from standout unsigned senior Tyler Harris, who sat most of the 1st half with foul trouble, and senior Matai Faiaipa’u who connected on 3 threes. Granada would get the win by a score of 79-58 and McKeever and Wilde were co-players of the game.

Granada: Wilde finished with a team-high 18 points; McKeever had 17 points and 10 rebounds; Harris 15 points; and Long and  Faiaipa’u both with 10 points.

The game of the event that had the Central Section buzzing for nearly two months since its announcement was between Sierra Canyon and San Joaquin Memorial, as was evident by the great turnout of over 5,100 people. All the top media from the Central Section was in the building to cover the highly touted roster for the Trailblazers headlined by Bronny James, Ashton Hardaway, and Isaiah Elohim. The Panthers were led by seniors Armari Carraway and Mike Davis Jr., but would not have standout sophomore Julius Olanrewaju due to CIF rules.

The Panthers came out ready for the hype and intensity of the moment, as Carraway knocked down 3 threes and 11 of his game-high 14 points before the break to keep pace with the Trailblazers. Sierra Canyon took advantage of their size and went into the post early and often to senior Jimmy Oladokun, who had 9 of his 11 points in the 1st half. Hardaway chipped in a pair of threes and had 8 of his team-high 12 points before the half. Despite the tough play of Carraway, the Panthers were down 32-22 at intermission.

Mike Davis got it going in the 2nd half, as he would score 9 of his 11 points after the break. Despite the valiant effort by the Panthers, the Trailblazers had too much firepower and depth. Elohim got going in the 2nd half and had 7 of his 9 points after the break and Hardaway connected on two big baskets that gave Sierra Canyon the breathing room needed to carve out the win, 53-44. Hardaway was the player of the game, but it was the depth of the Trailblazers that allowed them to get out of the Central Section with the victory.

San Joaquin Memorial: Carraway had a game-high 14 points; and Davis had 11 points and 7 rebounds. 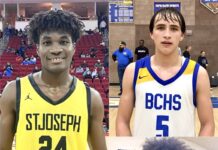 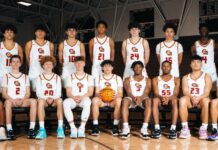 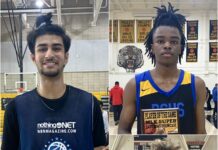