The Southern California area covered by this report is bordered by the Fresno area to the North and the Mexico border to the South (an area that includes 24+ million people). This list (Top 25 and an additional 40 players denoted as “next tier” and “honorable mention”) will be periodically updated and released and will include additional prospects as they emerge over the next few years.

With that foreword out of the way, here is our current Fullcourt Press Best of SoCal Class of 2023.

2.       LeBron James Jr.               6’2”    PG     Sierra Canyon (Chatsworth CA)
Athletic lead guard has excellent basketball instincts and plays with the poise of a veteran.  Smooth jump shot and nifty handles make him a potent perimeter threat.  Son of Laker LeBron James Sr. had a season-high 15 points including the go-ahead shot in Sierra Canyon’s 59-56 victory over his dad’s alma mater St. Vincent-St. Mary/Akron OH in a game played in Columbus OH this past season. Cal-Hi Sports All-Freshman Team pick had to wait his turn to shine behind several elite HS seniors (like Ziaire Williams and BJ Boston) this past year, but all the physical and intangible ingredients are there to be a major force in the 2023 class starting next season.  Bronny has reported offers from Kentucky, Duke and NC Central and is currently ranked #15 nationally by Van Coleman/Nothing But Net Magazine.

4.       Mike Price                          6’3”    CG     Crespi (Encino CA)
Quick and elusive scoring guard had plenty of impressive moments as a freshman this past season.  “Mike Mike” as his mom affectionately calls him, averaged a take-notice 23 points per game this past year.  Honor roll student showed out at the 2019 Pangos All-West Frosh/Soph Camp (Top 30 Game pick) and is ranked #38 nationally by Van Coleman/Nothing But Net Magazine.  Cal-Hi Sports All-Freshman Team pick is originally from the south side of Chicago IL.  While Portland may be the only school showing interest so far, it’s only a matter of time before high-major programs nationwide start calling.

6.       Jared McCain                   6’0”    CG     Centennial (Corona CA)
Big time shooting combo-guard stepped up in key moments for Centennial this season to nail clutch shot after clutch shot including an eye-opening 30 points vs. then Fab 50 #17 Neumann-Goretti/Philadelphia PA and was a major factor in Centennial’s Cinderella run to the 2019 Tarkanian Classic title (made all-tourney there, averaging 17.2 ppg).  Terrific student averaged 12 points per game this past season and connected for 9 threes in one game.  2019 Pangos All-West Frosh/Soph Camp “Next 20” Game and Cal-Hi Sports All-Freshman Team pick has an early offer from Eastern Washington with interest from the likes of Stanford, UCLA and Arizona State and is ranked #46 in 2023 by Van Coleman/Nothing But Net Magazine.

9.       Justin Daniels                  6’4”    WG    Mater Dei (Santa Ana CA)
Younger brother of 6-9 DeAndre Daniels (2014 UConn national champs and Toronto Raptors draft pick) is a lethal scorer from all 3 levels.  Like Kentucky-bound Devin Askew did as a Mater Dei freshman, he saw very limited minutes in year 1 at MD as well but don’t let that fool you. Justin is ahead of where older brother DeAndre was at same stage. Talent is there be in the Top 5 of this group when its all said and done. Showed his great potential at the 2019 Pangos All-West Frosh/Soph Camp where he was selected to the Top 30 Game.

10.       Xavier Edmonds             6’8”    PF      Bishop Montgomery (Torrance CA)
Strong and consistent front-court presence is productive on the boards and can finish with regularity around the cup.  2019 Pangos All-West Frosh/Soph Camp “Next 20” Game selection has a very nice motor and high IQ.   Arizona is among the early schools showing interest in this 2020 Fullcourt Press Spring League top performer.

12.      Gus Yalden                      6’8”    PF      Mater Dei (Santa Ana CA)
2019 Pangos All-Midwest Frosh/Soph Camp Top 30 Game pick is a burly and physical PF with surprising agility.  Terrific student had limited playing time this year due to Monarchs’ excellent upperclass DI front-court depth.  Wisconsin native who transferred into Mater Dei just before this past season started was offered earlier in the year by Utah and Cal State Northridge. Very good student has indicated that he will be transferring to The Asheville School (NC) next Fall.

14.      Ashton Hardaway             6’6”    CF      Bishop Montgomery (Torrance CA)
Smart and versatile player is the son of former NBA star and current Memphis coach Penny Hardaway.  2019 Pangos All-West Frosh/Soph Camp “Next 20” Game pick has ability to post-up near the cup as well as spot up with range to the 3-point line.  As he continues to fill into his rapidly growing body, he will become more and more of a force. Very good student and great kid was one of the top standouts at the recent Fullcourt Press Spring League.

Next Tier (in alphabetical order): 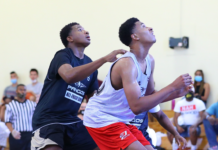 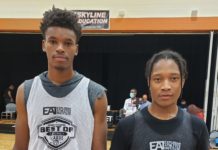