Southern California’s soph class is shaping up quite nicely and all signs point to it being a bumper crop of prospects with recruiting value coast to coast. There are at least 25 members of this class who are either bona-fide HM prospects or have potential to be recruited at the high-major level. That number might exponentially grow as rumors persist that several elite national 2022s are contemplating making moves next school year to the bright lights of LA.

Discussion of this class starts with its “Super 7” of Amari Bailey, Kijani Wright, Skyy Clark, Dior Johnson, Tre White, Dylan Andrews and Joseph Hunter.  Bailey is an athletic swiss army knife that makes big time plays, Wright has elite HM size and skill, Clark is an explosive lead guard with plenty of scoring punch, Johnson is a NY native with shifty ballhandling ability and a smooth pull-up jump shot, White is a strong WG that can explode to the rim, Andrews is an emerging elite lead guard prospect that makes big shots and Hunter has the HM versatility for a multi-position perimeter player that coaches crave.

This 2022 bunch is a very intriguing group that includes top notch size, athleticism, quickness, skill level and shooting ability. A few of the prospects listed below have recently indicated that they are transferring to schools out of the SoCal area this Fall but I have included them on this list for now since they are not officially enrolled at their future destinations yet.  One intriguing prospect  6-11 sophomore Dok Muordar, a long and athletic forward with HM potential that transferred from Canyon (Anaheim CA) to Santa Margarita (CA) prior to the season and was ineligible to play, has reportedly already left Santa Margarita for a prep school in Kansas.

The Southern California area covered by this report is bordered by the Fresno area to the North and the Mexico border to the South. This list (approximately 80 players strong) will be periodically updated and released and will include additional prospects as they emerge.

With that prelude out of the way, here is our current Fullcourt Press Best of SoCal Class of 2022.

1.    Amari Bailey                 6’5″    WG    Sierra Canyon (Chatsworth CA)
Athletic lefty swiss-army knife WG attacks the basket with authority and real bounce. Underrated ball-handler and decision-maker was summoned as a playmaker earlier this past season and he responded with remarkable poise and efficiency. Cal-Hi Sports All-State Sophomore of Year was the only soph named to the CIF-Southern Section Open Division Team and was part of the USA Basketball U16 team that won the FIBA America Gold Medal at Belem Brazil last summer. Key member of this year’s Sierra Canyon’s 30-4 squad ranked #17 in nation by Ronnie Flores’ Fab 50 national team rankings has current offers from UCLA (was once committed to the Bruins), Kansas, Illinois, Michigan and Alabama and serious interest from Kentucky.  Presently ranked #6 by Van Coleman/Nothing But Net Magazine, #6 by the 247Sports composite and #7 by Rivals.com. Reminds me of a young Anthony Peeler (Missouri/NBA). Father is former Indianapolis Colts WR Aaron Bailey (played collegiately at Louisville).

4.        Dior Johnson                  6’1”    PG     Mayfair (Lakewood CA)
Smooth and shifty ballhandler can really shake defenders to their socks and dial from deep as well. Dior recently committed to Syracuse over other suitors including Alabama, Arizona State, LSU, St. John’s, Georgia Tech, TCU and Washington. Cal-Hi Sports All-State Soph 1st Team selection is presently ranked #4 by Rivals.com, #5 by the 247Sports composite and #7 by Van Coleman/Nothing But Net Magazine.  Dior just announced that he is back on the move East to attend Oak Hill Academy (Mouth of Wilson VA) this Fall.

7.       Joseph “Jo Jo” Hunter    6’5”    CG     San Joaquin Memorial (Fresno CA)
Extremely versatile perimeter player has the exquisite passing skills and court vision to be a potential point guard at the next levels. Hunter is an excellent defender and loves to push the rock in transition with the requisite hoop IQ to make the right read to either hit the open man or use his size and quickness to finish at the rack. Cal-Hi Sports All-State sophomore 1st Team selection is ranked #47 by Van Coleman/Nothing But Net Magazine, #51 by the 247Sports composite and #62 by Rivals.com.  2019 co-MVP of the Pangos All-West Frosh/Soph Camp Top 30 Game (7 points, 6 boards and 8 assists). Solid student has early offers from Nebraska, Washington State, Fresno State, Loyola Marymount and UTEP and is getting interest from Maryland, Marquette, Oregon and Arizona State,

11.      Shy Odom                       6’6”    CF      Sierra Canyon (Chatsworth CA)
Physical warrior competes on every play and plays with the tenacity coaches love. Tremendous rebounder defends with energy and scores consistently through contact at the rim with athleticism. Presently ranked #83 by Van Coleman/Nothing But Net Magazine, this Boston MA area native is a good student with offers from Georgetown, Tulane and Boston University and interest from the likes of Virginia, Purdue, Michigan and Vanderbilt.

15.      Jeremiah Christian Nyarko   6’8” 2022   St. John Bosco (Bellflower CA)
Athletic and active PF with improved footwork on the block is a player on the rise. Improved jump shooter runs floor very well with ability to finish in transition. At the moment Jeremiah sits in the #81 spot in Van Coleman/Nothing But Net Magazine national rankings and is a 2019 Pangos All-West Frosh/Soph Camp Top 30 Game selection. Good student is a Ghana native that has heard from San Diego State, Stanford, UCLA and USC. Love his upside, attitude and character.

17.      Max Allen                        6’8”    PF      Heritage Christian (Northridge CA)
Strong and burly big man is skilled on the block and can finish consistently in the paint.  Max started his HS career at Bishop Gorman (Las Vegas NV) and appears on the move once again as he recently announced he was leaving Heritage Christian after just one year. Sierra Canyon, Ribet Academy and Windward appear to be possible destinations. Needs to make a commitment to get in better shape to fulfill his immense potential. Solid student has offers from Boston College, DePaul and UNLV with interest from Florida State, Oregon State, Grand Canyon, Illinois and San Diego State.

30.      Juaquin Strong                6’7″    PF      St. Bernard (Playa del Rey CA)
Promising young athletic forward is very improved with a nice overall skill set. Son of former Xavier star and NBA PF Derek Strong, JQ is a good student. Showed out well at the recent Fullcourt Press Spring League and was one of the most promising prospects there.

38.      Tyus Parrish-Tillman      6’7”    PF      Fresno Christian (Fresno CA)
Strong power-forward has the strength to finish on the block. Very good student led Fresno Christian to the CIF-Central Section Division V title (had 24 points and 14 boards in the Final). Will be transferring to Clovis West next Fall. Mom (Amy) played college hoops at Oregon and Fresno State.

* Rickie Isaacs                            6’2”    PG     Wasatch Academy (Mt. Pleasant UT)
Although Isaacs spent his soph season at Wasatch and lived in Las Vegas NV a few years prior to that, he was born in Los Angeles and is the son of Rick Isaacs of legendary H-Squad fame.  Burst on to the national scene as an 8th grader at the 2018 Pangos All-American Camp. Was the starting PG on the USA Basketball U16 team that won the FIBA America Gold Medal at Belem Brazil last summer. Extremely savvy playmaker plays much wiser than his age and has impeccable ballhandling, passing and shooting skills. Led Wasatch Academy to a 27-2 record and a #2 national Fab 50 team ranking this past season. Reminds me of a young Jacque Vaughn. Current offers include Arkansas, Arizona, Boston College, Florida State, Kansas, LSU, Oklahoma, Oklahoma State, Ole Miss, Rutgers, TCU, Texas A&M, Texas Tech and Vanderbilt. Currently ranked #10 by Van Coleman/Nothing But Net Magazine, #19 by ESPN.com, #21 by the 247 Sports Composite and #27 by Rivals.com. 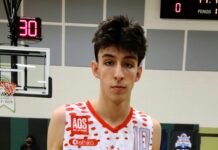 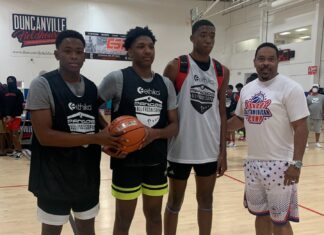