By Sean Ceglinsky, Nothing But Magazine Contributor

Cade Cunningham from Bowie (Arlington, TX) had a reasonably good idea of what to expect at this weekend’s Pangos All-South Frosh/Soph Camp outside of Dallas (TX).

With it being his second appearance in as many years, the 6-foot-6 forward from the Class of 2020 appeared to be more than comfortable. From start to finish, that is.

Never was that more evident than on the final session as Cunningham capped a memorable two-day run with a selection to the Cream of the Crop Top 30 Game.

Even better, to put the proverbial exclamation point on things, he was named as the camp’s Most Outstanding Player, along with Greg Brown from Vandergrift (Austin, TX)

“This a great camp for exposure, that’s why I was out here, back for Round No. 2, to play against the best talent in the country and prove myself,” Cunningham said.

Named among the Top 50 to track in his class by Nothing But Net Magazine, proving himself against the best in the business is something that simply comes with territory.

No stranger to elite-level play, Cunningham has been contact by several colleges, LSU, Texas A&M, Oklahoma State and Kansas, to name a few of the noteworthy.

“It’s a family decision, we don’t really talk, or discuss recruiting that much, but I can tell you that things are going good right now and it’s nice to have options,” he said.

Seemingly prepared, not only with a plan for a potential commitment, but also a strategy in advance of this weekend, it was mission accomplished for Cunningham.

Everything’s bigger in Texas: Without fail, Brown or Cunningham are most often mentioned during talks about the state’s top players in the Class of 2020.

Still, it’s about time for K.J. Pruitt from Universal Academy (Coppell, TX) and Hayden Brittingham from Crowley (Ft. Worth, TX) to be included in that whole conversation.

Pruitt turned more than a few heads, and little surprise, the 6-3 guard has been contacted by several schools, most notably multiple teams from the Big 12 Conference.

At first glance, Brittingham seemed to have a frontcourt player’s build. Yet, the 6-4 guard went out and got the job done on both ends, with unmatched athleticism.

Moody is the man: Never one to shy away from a challenge, Moses Moody from North Little Rock (Little Rock, AR) thrived when it mattered most, with the most at stake.

Arkansas and Oklahoma are fans of his right now, therefore it’s reasonable to expect the 6-5 sophomore guard will have his choice of schools by the time he’s a senior.

Nightmare from Nigeria: Jerry Iliya from CGM Academy (Phoenix, AZ) arrived stateside not long ago from Nigeria and no one has figured out a way to stop him since.

Baylor, Nebraska, Texas Tech and Tulane are interested in the 6-6 sophomore forward. Arkansas and Georgetown might also be in the mix sooner rather than later.

Doakes shines in the spotlight: A teammate of Moody on the prep circuit, Gerald Doakes from North Little Rock (Little Rock, AR) certainly made a name for himself.

The 6-1 sophomore guard scored 18 points in the Cream of the Crop Top 30 Game, and as a result, was named as Most Valuable Player following the showdown’s final buzzer.

Edwards opens up eyes: Hoping to test his mettle against the best from all over the country, P.J. Edwards from Lanpher (Springfield, IL) ventured down South and did well.

Already recognized as one of the top players in the Midwest for his class, and once words spreads about his effort, recruiting will pick up for the 6-3 sophomore guard.

Alexander emerges on the scene: Wise beyond his years, Trey Alexander from Heritage Hall (Midwest City, OK) wasn’t intimidated by the environment or competition.

The 6-4 freshman guard is one to watch moving forward. It’s only matter of time, one would think, until he ends up on the radar of Oklahoma and Oklahoma State. 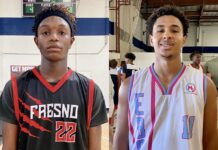 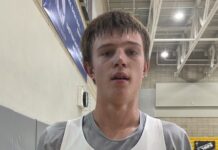 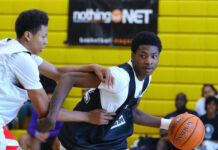