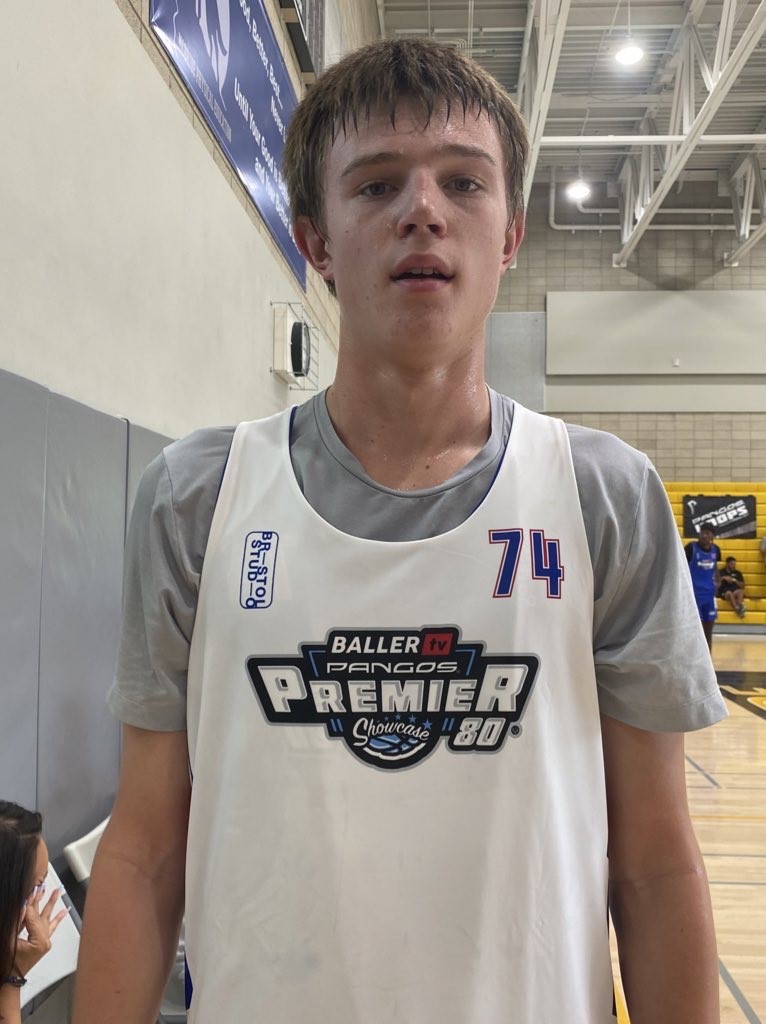 Long Beach, CA – Wednesday, July 6th, kicked off the first of two NCAA Viewing Periods, and the place to be for the afternoon was the Pangos Premier 80 Showcase. This invite-only event had 8 showcase games on two courts over a span of four hours and featured 80 prospects from 19 different states ready to showcase their games in front of the likes of UCLA, USC, Arizona, Arizona State, Georgetown, Cal, Utah, TCU, Oklahoma, Fresno State, UC-Irvine, UC Riverside, and other Division 1 programs. This article takes a look at the top ten players from the event, provides an evaluation of their game/skill set, and includes their player information. Although I did speak with other scouts and media in attendance about these players and others, this list of players is my own, as others may have a slightly different list. This is a list of my top ten players, however, there is no rank order to the top 10. The players are listed in alphabetical order. I begin by taking a look at one of the youngest players at the Premier 80, Kaiden Bailey.

2026 6’2 Kaiden Bailey (Orange Lutheran/Orange CA)
Bailey is a shooting guard that has limitless range from beyond the arc once he crosses halfcourt. Bailey, an incoming freshman, was one of the youngest players at the Premier 80 but did not let that stop him from showcasing his overall skill set. Bailey has good moves off the perimeter, shifty handles to evade defenders, good body control to finish through contact at the rim, effective stop and pop mid-range shot, and is very accurate from the 3-point line. Bailey connected on at least seven 3’s in his two showcase games and let a few go from at the college line, if not deeper.

2023 6’8 Zyier Beverly (Washington/Los Angeles CA)
Beverly is a wing/forward with great length and superior Athleticism.  Beverly has recently received multiple Division 1 offers and had the Division 1 coaches in attendance at the Premier 80 Showcase impressed with his current skill set along with long-term upside. Beverly controls the rebounds, uses his massive wingspan to protect the rim, and has elite jumping ability that he uses to dunk everything around the rim. Despite his pro-level dunk package, Beverly has shown he can get to the mid-range area and hit shots with consistency. More impressive, Beverly does hit the 3-pointer with regularity and, as his handles and skills continue to grow, that will open up a lot of options, specifically open lane drives to the basket for monster dunks.

2024 6’6 Pearson Carmichael (Summit/Bend OR)
Carmichael is a pure shooter that is developing into a quality combination guard that has range from deep. Carmichael has been a player I enjoyed watching in the Spring but had not seen him since mid-May and he looked ready to take on the month of July, starting with an impressive showing at the Premier 80 Showcase. Carmichael keeps the ball on a string when he has it in hand, good moves to create off the dribble, adjusts his pace of play to keep defenders off balance, has good body control when attacking through traffic, and a creative finisher around the basket. Carmichael has a smooth shooting form, can fill it up from the perimeter, has the moves and the handles 2 create his own shots off the dribble, and is improving as a playmaker with good court vision.

2023 6’7 Mike Davis Jr. (San Joaquin Memorial/Fresno CA)
Davis is an active and assertive forward that makes his presence felt around the basket and on the glass. Davis was nearly unstoppable when he had the ball around the rim and accounted for countless putback buckets in both showcase games. Davis controls the boards on both ends, has timely instincts to be an effective rim protector, has nice touch on his finishes around the rim, and he gets a lot of second-chance points due to his efforts on the offensive glass. Davis does have enough handle to create off the perimeter, as well as push the ball in transition off the boards. He is effective enough from beyond the arc to space the floor and has a good shot when he takes his it.

2023 6’5 Carter Gittens (Sunrise Mountain/Peoria AZ)
Gittens is a physical and athletic wing/guard that can impose his will on the opponent and has a nice shot from the perimeter. Gittens got going early and often at the Premier 80 Showcase and proved to be one of the top two-way players at the event. Gittens has good handles and moves to create off the perimeter, a good burst of speed to attack downhill, the ability to stop on a dime and gets nice lift on his mid-range jump shot, and the strength to finish through contact at the basket. Gittens is accurate with the 3-ball, which fits nicely with his ability to attack open lanes and finish strong at or above the rim. Defensively, Gittens has the size, footwork, and agility to defend any perimeter player, as well as enough strength to hold his own against taller players.

2023 6’1 Yorgio Golesis (Skyline/Salt Lake City UT)
Golesis is a tough-minded and crafty combination guard that impacts both ends of the floor with a high level of energy. He got himself in the flow of the game from the jump and showed he can affect the game on or off the ball as a scorer. Golesis has shifty moves with tight handles to knife through the defense, good court vision to make plays when on the attack, and a creative finisher at the basket with touch on the floater. Golesis has shown he can score it effectively from all 3-levels and, defensively, he locks in and helps create turnovers that turn into easy transition points.

2025 6’8 Nikolas Khamenia (Harvard-Westlake/North Hollywood CA)
Khamenia is a wing/forward that can score the ball from various spots on the court and ready to take big shots in key moments. The Premier 80 had some stellar class of 2025 prospects, which was led by Khamenia who knocked down the game-winning 3-pointer to give his team the win in his second showcase game. Khamenia has a smooth stroke on his perimeter shot, has the handle to create separation from his defender, the size to shoot over smaller players, and with his range, he pulls bigger opponents away from the basket, which opens up driving lanes for himself or teammates. He is a serviceable rim protector, controls the glass on both ends, and with his handle, he is able to push the pace of play off the backboard. In a gym full of talent, Khamenia asserted himself as one of the top players at the showcase.

2023 7’1 Isaiah Miranda (Southern California Academy/CA)
Miranda is a lengthy and rangy forward/center that impacts the game in numerous ways with the ability to space the floor from beyond the arc. Miranda was a big reason that the coaching turnout at the Premier 80 featured top schools from across the country and he was the most unstoppable player at the showcase. Miranda has great size, which is enhanced by his massive wingspan that leaves a mark on the game on both ends. Miranda is an elite rebounder, uses his length to protect the basket, generates a lot of second-chance points, and has a great touch on shots within fifteen feet. Miranda can also pull his defender out past the 3-point line and is accurate with his shot from distance. He showed enough handle to take advantage of bigs over pursuing his perimeter shot and can put the ball on the deck and get to the lane.

2024 6’2 Styles Phipps (St. Mary’s/Phoenix AZ)
Phipps is a high-level lead guard that has great court vision and makes quality decisions with the ball in hand. Phipps was solid in his first showcase game at the Premier 80 but he went to work in his second game and was getting into the teeth of the defense regularly, showing his playmaking and shotmaking ability. Phipps keeps the ball on a string, constantly surveying the floor with his head on a swivel, and changes pace so fluidly he is able to shake most initial defenders, where he puts pressure on the defense. Phipps can stop on a dime for a nice pull-up jumper, has good range and accuracy on his 3-point shot, and knows how to control the pace of play to get it to his level of comfort.

2023 6’4 Parker Strauss (Pacifica Christian/Newport Beach CA)
Strauss is a lengthy and high-energy guard/wing that can light it up from the perimeter and has range beyond the arc. Strauss is coming off a very productive Section 7, and kick-offed the first July NCAA Live Period looking to impress the numerous Division 1 coaches in attendance. Strauss has good handles, makes good use of the wide crossover and hesitation moves to create separation from his opponent, uses his long strides to get by his defender, and is a creative finisher around the basket. Strauss is a proficient 3-level scorer, has a reliant mid-range jump shot off the dribble, and has range on his 3-ball with range and efficiency. 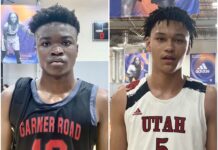 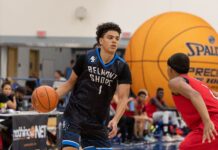 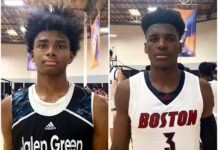