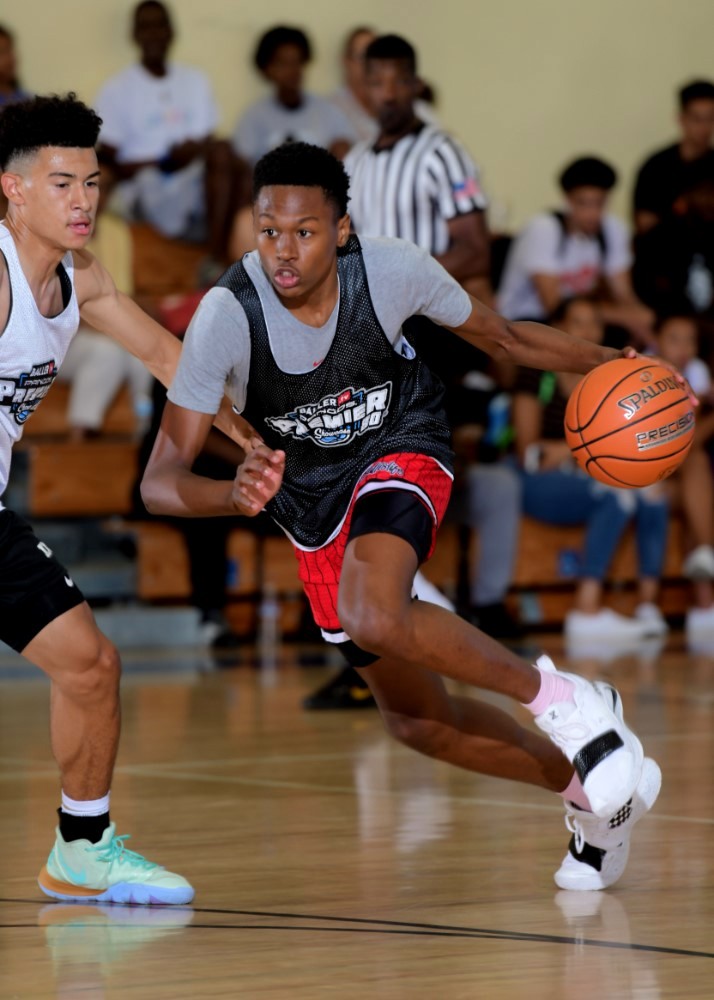 Following a strong class like 2020 is not always an easy thing to do but despite SoCal’s Class of 2021’s lack of strong overall quality individual talent, there are some intriguing prospects and good future long-term college players to be harvested. SoCal 2021’s top dog for the past 2 years Devin Askew (Mater Dei/Santa Ana CA) decided to re-classify up to the 2020 class and take his talents to Kentucky earlier than expected. That leaves the current top spot for the player with arguably the best long-term potential 6-7 wing Peyton Watson (Poly/Long Beach CA) who is the Moore League’s best prospect since 2008 when future NBA All-Star & Olympian DeMar DeRozan was a human highlight film for Compton HS. After that it is pretty much wide-open within the next 15 spots as Dixon-Waters and Malik Thomas (both bound for USC) had great junior seasons as did KJ Simpson and Obinna Anyanwu (who suffered a serious car accident injury that raises questions regarding how fast he can return to form), Breidenbach has been a household name in this class for a while now and it’s time for him to take it up a notch this Summer, Mashack is a defensive dynamo with improving scoring skills, Powell is a strong and tough forward that makes winning plays on both ends and Wainwright has nice potential as a high-major scoring guard.  Mallette is a crafty, high scoring combo-guard, O’Garro is an athletic swingman oozing with long-term HM potential, Hornery has excellent length to go along with a sweet shooting stroke, Elliott is a confident lead guard than can make clutch shots, Yu has massive size and is one of the most improved juniors in the West, Turner can flat-out shoot it with range and Knapper may be small but has extremely good bounce and can finish against length at the cup.

The Southern California area covered by this report is bordered by the Fresno area to the North and the Mexico border to the South.  This list (almost 80 prospects strong) will be periodically updated and released and will include additional prospects as they emerge.

With that prelude out of the way, here is our current Fullcourt Press Best of SoCal Class of 2021.

1.       Peyton Watson                6’7”    WG    Poly (Long Beach CA)
Athletic and multi-dimensional wing with ability to finish at the rim as well as connect from beyond the 3-point arc is one of the most improved players in the nation over the past year.  Peyton’s immense potential has not gone unnoticed as he is (with Devin Askew’s early departure to Kentucky) SoCal’s top-rated national 2021 recruit.  Currently nationally ranked #19 by Rivals.com, #22 by the 247Sports.com Composite, #49 by Van Coleman/Nothing But Net Magazine and #50 by ESPN.com, Watson has offers from UCLA, USC, Arizona, Arizona State, Washington, Oregon, Cal, Maryland, San Diego State, Gonzaga, Texas Tech and Utah with Kentucky just coming into the picture as of late.  While his long-term potential is too great to ignore, what I would like to see in his next stage of development is to improve his toughness, strength and consistent competitiveness.  Good student and great kid was an All-CIF Division I selection, MVP of the Moore League and a Long Beach Press-Telegram Dream Team 1st team selection.

4.       Malik Thomas                  6’3”    WG    Damien (La Verne CA)
Strong and physical WG bullied most of the defenses he faced this year, averaging 25 points and 7 rebounds per game and setting a school record for points (888) and making 93 three-pointers in the process. Thomas has really refined his 3-point shot over the past year.  Joined Reese Dixon-Waters recently by giving USC verbal commitment over offers from Arizona, Washington and Washington State.  Good student was San Gabriel Valley Tribune Player of the Year and an All-CIF Division I selection. Currently nationally ranked #87 by Rivals.com, #102 by Van Coleman/Nothing But Net Magazine and #103 by the 247Sports.com composite.  Thomas was terrific at last August’s inaugural Fantastic 40 in Las Vegas, being a prime catalyst in Compton Magic Elite’s run to the title there. Primed for a stock rise once we get back on the court this summer.

5.       KJ Simpson                     6’2”    WG    Chaminade (West Hills CA)
Athletic combo-guard has nice ability to score at a high clip off the bounce as well as by spotting up from long range.  Reminds me of former Arizona guard and NBA player Nick Johnson.  Very good student averaged 22.7 ppg and was an All-CIF Division 2-AA selection.  KJ has offers from Arizona State, USC, Arizona, Washington State, Georgia Tech, UC-Santa Barbara, Santa Clara, Pacific and Loyola Marymount.  Although currently ranked #108 by Van Coleman/Nothing But Net Magazine, #114 the 247Sports.com composite and #148 Rivals.com, look for Simpson to make a big jump up the national rankings this July.

6.       Wilhelm Breidanbach      6’8”    PF      Mater Dei (Santa Ana CA)
Confident forward with range on jump shot is an excellent student and tough customer in the paint. Needs to improve his consistency of effort and production.  Had tendency to be up and down this year.  Only 2021 player that was an All-CIF-Open Division 1st team selection this year and was an Orange County Register All-Orange County 1st team selection as well.  Wilhelm has offers from Cal, Nebraska, Stanford, USC and Vanderbilt.  1st team Trinity League pick is currently ranked #51 by Van Coleman/Nothing But Net Magazine, #95 by the 247Sports.com composite and #130 by Rivals.com.

8.       Tyler Powell                   6’5”     CF       Ribet Academy (Los Angeles CA)
Tough and physical forward competes (in the immortal words of Kevin O’Neil) on every play, every day.  Scores well through contact and is a regular visitor on the glass.  2020 CIF-2A Player of Year led Ribet to a CIF title and has offers from Nevada, Pepperdine, San Diego, Loyola Marymount, UC-Irvine and Long Beach State and is hearing from San Diego State, Washington State, TCU, Florida State and Oregon State.  One of the most underrated players nationally, Tyler is ranked nationally #121 by the 247Sports.com composite and #147 by Rivals.com.

9.       Tsalta (TJ) Wainwright    6’3”    CG     Westchester (Los Angeles CA)
Lefty flamethrower has always been a scoring threat and with increasing strength and a growth spurt that has pushed him to 6-3, TJ is becoming even more of a problem for opposing defenses. TJ’s jump shot has plenty of long-distance range and he is also effective with the mid-range floater. Averaged 14 ppg for a well-balanced (and low-scoring) Comet squad that won the 2020 LA-City CIF title.  Has also improved his decision-making and passing skills considerably over the past year and has got better defensively under the tutelage of veteran coach Ed Azzam.  Has the confidence necessary to make big shots as his game-winning 3-point dagger vs. CIF-North Coast champ Bishop O’Dowd at the Torrey Pines Holiday Prep Classic demonstrates (made all-tourney there as well as at the Tarkanian Classic). UC-Santa Barbara, Pepperdine and Loyola Marymount are among his offers with interest from Gonzaga (took an unofficial visit there last Fall), Oregon, Washington State, Vanderbilt and Yale. 2020 LA-City CIF 1st team selection and 1st team South Bay Daily Breeze All-Area pick is currently ranked #99 nationally by Van Coleman/Nothing But Net Magazine.

15.      Luke Turner                     6’6”    WF     Rancho Christian/Temecula CA)
Long-distance rifleman shoots the rock with confidence and with a quick release and is an underrated rebounder. Very good student earned all-tourney honors at the Classic at Damien and has offers from UTEP, Pepperdine, UC-Riverside and Loyola Marymount and is hearing from the likes of Washington State, Utah, Stanford, Penn, Yale, Davidson and Liberty.

16.      Brenton Knapper             5’11”  PG     Colony (Ontario CA)
Quick and bouncy lead guard competes on every play.  Hard to contain off the dribble and is an impressive finisher at the rim for his size.  Knapper has already committed to Santa Clara and was an All-CIF Division I selection.  Good student too.

29.      Daniel Esparza                 6’1”    PG     Sonora (La Habra CA)
Smart and savvy point guard has high basketball IQ and knows how to run a team.  Very good shooter with nice court vision.  2020 Whittier Daily News Player of the Year led Sonora to the Freeway League title and was named the league MVP after he averaged 19 ppg.  Esparza, a great student, has offers from Cal Poly and Pacific and was chosen to the All-CIF Division 2A first team.

31.      Kevin Bradley Jr.             5’10”  PG     Crenshaw (Los Angeles CA)
Very quick PG is a nifty ballhandler that can slice through defensive pressure.  Excellent court vision and very underrated scoring ability.  Son for former Crenshaw star and Utah PG Kevin Bradley (part of the loaded SoCal Class of 1997) averaged 24 points and 6 assists for Crenshaw this past season.  Washington, Loyola Marymount and Northern Arizona among schools that have been in touch.

35.      Jaden Byers                      6’2″    CG     Rancho Christian (Temecula CA)
Quick and pesky combo-guard is always in attack-mode.  Despite having a streaky 3-point stroke and at times, questionable shot shot-selection, the natural talent is there to be a valued recruit.  Terrific student has offers from Loyola Marymount and San Diego.

38.      Jaden Geron                    6’7”    WF     San Joaquin Memorial (Fresno CA) Versatile swingman is a jack-of-all-trades player that is productive in many ways.  Good ballhandler for size has both slashing and perimeter scoring ability and is a very good student,  Geron, along with very talented 6-5 soph lead guard Joseph Hunter, led SJM to the CIF-Central Section Open Title over Clovis West.  Santa Clara, Montana, Princeton, Fresno State, San Diego and UC-Riverside are among schools that have been in touch.

40.      Casey Jones                   6’6”    WF      Mater Dei (Santa Ana CA)
Seattle WA area native transferred to Mater Dei for his junior year and was relegated to a back-up role due to the Monarchs’ great interior depth (Breidenbach, Hornery, Davidson & Logan Cremonesi) but he is a very athletic forward that plays hard and can finish in transition and in traffic.  Very good student could be one of the West Coast top surprises this July.

*         Jeremiah Davis                6’3”    WG    Fountain Valley (Fountain Valley CA)
All-CIF 3A selection is an athletic guard that averaged 23 points, 6 boards and 4 assists for coach D’Cean Bryant’s Barons who made school history this year by reaching the CIF-SS 3A semi-finals as well as winning their 1st ever state playoff win.  Hearing from UC-Irvine and Pacific. 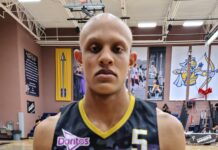 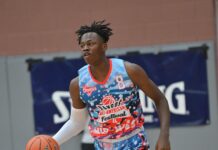 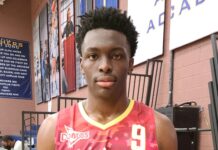 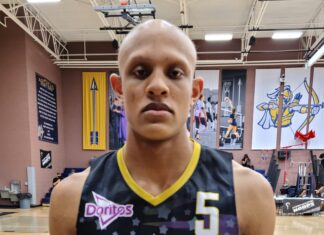