I was on-hand for the start of the 2nd day of the 2019 Take Flight Challenge at Redondo Union HS (Redondo Beach CA) and transitioned to the night session (final 3 games) of the Real Run Winter Classic being held conveniently 2 miles away at Bishop Montgomery (Torrance CA).

All those guys minus RD-W were on display Saturday night at the Real Run and again performed with distinction.

Here are several other players that I saw at both events on Saturday that also impressed me.

Evan Mobley                  7’0”    2020   Rancho Christian (Temecula CA)
We’re running out of superlatives for the nation’s #1 high school player in 2020.  Mobley reminded us how special he is in Rancho Christian’s 82-69 victory over Santa Clarita Christian at the Real Run Winter Classic, scoring 22 points (10/13 FG) to go along with 9 boards, 8 assists, 5 blocks and 4 steals. Well known as a quick jumper, formidable rim-protector and efficient scorer in the paint, Evan does not get enough credit for his exceptional ball-handling skills in the open floor, perimeter range on his jump shot and unselfish play.  Will team-up again with older brother Isaiah Mobley next season at USC which should make the Trojans serious national contenders in 2020-21.

Jaylen Clark                    6’5”    2020   Etiwanda (CA)
Active and confident wing scorer had 17 of his game-high 23 points in the second half in a big 75-43 win over Birmingham (Lake Balboa CA) at the Take Flight Challenge despite coming off the bench for Etiwanda coach Dave Kleckner.  Clark just became eligible on December 30th and has wasted no time reminding us that he is, along with Jalen Green, Josh Christopher and Ziaire Williams, among the top 4 unsigned seniors out West.

Josh O’Garro                   6’5”    2021   Santa Clarita Christian (Santa Clarita CA)
One of America’s most underrated juniors, this lefty swingman is athletic in transition, competes on every play and defends with the intensity coaches love.  Josh had a game-high 19 points versus Rancho Christian.  USC, Michigan, Stanford and San Diego State are among the growing number of schools becoming aware of his talents.

Ty Harper                         6’3”    2020   Santa Clarita Christian (Santa Clarita CA)
Bouncy WG plays with energy on both ends.  Athletic enough to finish with authority at the rim, Ty has also improved 3-point range.  Harper scored 17 points in a hard-fought loss to Rancho Christian.  Georgia native received a recent offer from Virginia Tech to go with a previous one from Detroit.

Amound Anderson           6’3”    2020   Leuzinger (Lawndale CA)
Unsigned senior sleeper keeps getting better and better.  Lead guard with excellent ball skills, passing ability and downtown perimeter stroke, Anderson had 33 of Leuzinger’s 55 points in a 6 point loss to Loyola (Los Angeles CA) at Take Flight.  Emerging as one of SoCal’s top 2020 prospects still on the board.

Ramel Lloyd Jr.                6’5”    2022   Taft (Woodland Hills CA)
Ramel’s sophomore HS season has been a break-out year as he is rapidly developing into the high-major prospect I thought he would be coming out of middle school.  Lloyd was cooking against Colony/Ontario CA at the Take Flight Challenge, pouring in a game-high 31 points.  Strong and physical wing can finish on drives to the hoop as well as stroke the perimeter jump shot.  Son of Rock Lloyd (NY native that played at Syracuse and Long Beach State) has been offered by Arizona State, Dayton, DePaul and Fresno State.

Max Allen                         6’8”    2022   Heritage Christian (Northridge CA)
Although Max still needs to get in better physical condition, the Bishop Gorman/Las Vegas NV transfer is a skilled PF that takes up massive space in the paint and has a soft scoring touch that extends to the 3-point arc.  Excellent rebounder too.  Max had 12 boards in HC’s win over Bishop Montgomery.

Christian Watson             6’2”    2022   Poly (Long Beach CA)
Only a growth spurt away from being a sought-after D1 recruit, Christian is starting to emerge from his older brother’s shadow (highly regarded 6-7 2021 Peyton Watson) and primed to make a name of his own. Christian was a key factor in keeping Poly in contention versus Mayfair as he produced 18 points on 7/12 FG, 7 rebounds and 5 assists. 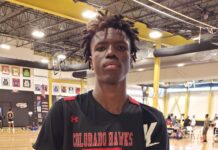 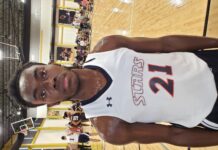 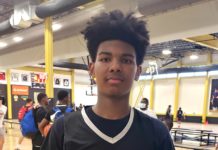 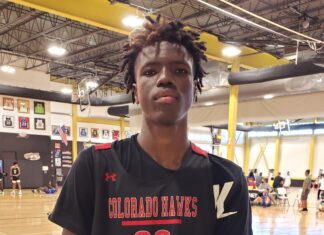