Following up on that great foundation, the 2nd annual Pangos All-American Festival was held last weekend (August 28-29, 2021) at Amplus Academy in Las Vegas NV and again there were more than plenty of top talent on-hand.

BallerTV.com live-streamed all 4 games at the event (now available for replay):
https://www.ballertv.com/events/pangos-all-american-festival-4
The title game was also broadcast on YouTube: https://www.youtube.com/watch?v=rExeqmzG_VI

In the championship game Jaxon Kohler had a game for the ages, erupting for 53 points and 23 rebounds . That fantastic clinic of post moves and footwork earned Kohler event MVP honors and propelled the West to an early lead and they never looked back as they cruised to a 133-112 win over the East. Jaylen Thompson caught fire from the 3-point arc in the 2nd half, connecting on 6 threes en route to 24 points. Collin Chandler was also superb adding 16 points and a team-high 8 assists. For the East, Fabio Basilis did all he could to keep the East in contention, having team-highs in points (27) and assists (8). Ernest Udeh displayed flashes of post dominance, scoring 26 points on 11/14 FG for the East while Ven-Allen Lubin added 18 points.

Collin Chandler                 6’4″   2022   Farmington (UT)
Smooth and bouncy lead guard has already acquired a major reputation as an athletic driver and finisher and accurate long-range shooter. Pressed into action on the ball here, Chandler also displayed an impressive playmaking ability with his court vision and pin-point passing (had a team-high 8 assists here). Collin averaged 15.0 points and 6 assists per game. Veteran scout Frank Burlison has pegged him as his best 2022 wing guard in the West and I can’t quarrel with that assessment. Belongs in the discussion for 2022 McDonald’s All-American Game and will get my vote as a Top 20 selection on my Spalding All-American Team ballot next Spring. CC’s fine play this past year is starting to get traction in the major national rankings as ESPN.com just named him as their #29 ranked player in 2022. Video Highlights:
https://twitter.com/CourtsideFilms_/status/1432323168144814081

Isaiah Elohim                     6’5”   2024   Sierra Canyon (Chatsworth CA)
Very talented sophomore guard is quickly becoming a household national name in the 2024 class (currently checks in at #4 in 2024 by ESPN.com). Isaiah is a power lead guard with size, elite athleticism and a terrific pro-style mid-range game. Isaiah was the leading scorer (28.5 ppg) at the Nike EYBL’s 15u Peach Jam division this past July in North Augusta SC. Elohim’s early offers include Oregon, USC, Arizona, Arizona State and Washington with Kansas, UCLA, Texas and Kentucky among the other major schools showing interest. Spent his freshman HS year at Heritage Christian (Northridge CA) before making the move to Sierra Canyon.

Jaxon Kohler                     6’8”    2022   SoCal Academy (Los Angeles CA)
Kohler’s terrific exhibition of post-moves and foot-work are from a bygone era but it has proved to be effective in this modern period of hoops as well. It wasn’t just his 53 points on 19/29 FG (including 2 threes) and 23 boards that was impressive here but also his performance against one of the more dominant and elite 2022 centers Ernest Udeh. Utah native attracted an offer from Michigan State shortly after the conclusion of the event and is officially visiting Iowa this weekend. Other visits planned include USC, Nebraska, Oklahoma, Washington and Michigan State. Kohler also played well this summer at Pangos All-American Camp invitee (made Top 30 Game) and NBPA Camp in Orlando FL. ESPN.com’s #40 2022 prospect’s stock is climbing fast.

Joshua Jefferson               6’8”   2022   Liberty (Henderson NV)
Strong and versatile forward is one of the most underrated players in national 2022 class and its rather mystifying. Consistent scorer plays winning basketball and can put the ball in the hoop anywhere from the 3-point arc and in. Joshua had a very efficient 16 points (6/8 FG; 1/2 3FG) in the West’s title game win and shot at a nice 58% FG clip throughout the event. Hometown program UNLV, Nebraska, Utah State and St. Mary’s are among the programs recruiting Jefferson the hardest right now. Very good student (3.8+ GPA) played well at last June’s Pangos All-American Camp (selected to the Top 60 Game) and was a core piece of Dream Vision’s adidas 3SSB championship team in July. Dad Ben Jefferson played football at Maryland and in NFL. Video-highlights:
https://twitter.com/CourtsideFilms_/status/1433128718831083524

Jaylen Thompson              6’7”   2022   SoCal Academy (Los Angeles CA)
Athletic and slithering swingman provokes memories of a young Rip Hamilton (UConn/NBA). Thompson is an excellent shooter and has the length and quickness to be a very good defender at the next level. Bay Area native averaged 19.5 ppg here on 15/28 FG including 6/10 3FG in title game (scored 24 points). Stanford is believed to be the strong leader at this point for 247Sports.com’s #60 prospect in 2022. 2021 Pangos All-American Camp invitee (made Top 60 Game).

Kijani Wright                    6’9”   2022   Sierra Canyon (Chatsworth CA)
Very strong and physical PF with smooth stroke that extends to the 3-point line has committed to USC over offers from the likes of Stanford, Arkansas, Kansas, Texas, Arizona State and Cal. Excellent student and the 247Sports.com Composite’s #12 player in 2022 averaged a solid 10.5 ppg here. Wright is transferring to Sierra Canyon for his senior season after spending his first three years of high school at Windward (Los Angeles CA). 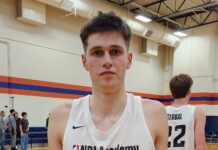 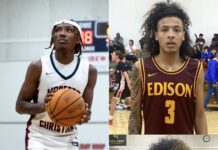 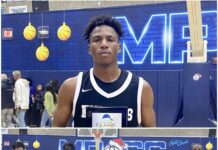